Dayton.com story: Why these Wright State graduates are getting noticed abroad 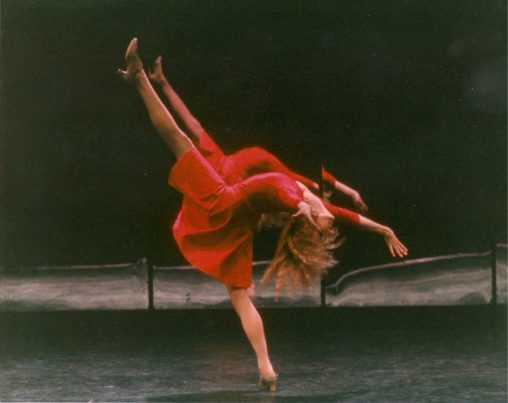 Wright State alumna Heather Douglas (seen here as Cassie in 1990 s A Chorus Line ) is a London-based choreographer who had leading roles in such West End productions as Chicago, Cats and The Producers.

In fact, Law Terrell Dunford (Javert in 2014’s “Les Misérables”) is in the ensemble of Broadway’s hit musical “Waitress” and Jon Hacker (Curly in 2013’s “Oklahoma!”) portrays Joey in the newly remounted off-Broadway production of “Jersey Boys.” But across the pond, three alums have particularly taken London’s West End theater scene by storm.

Heather Douglas, the Department’s first Distinguished Alumna, portrayed Velma Kelly in “Chicago,” Bombalurina in “Cats” and Ulla in “The Producers” to name just a few. Her film contributions include “De-Lovely” (starring Kevin Kline) and “The Producers” (she was Uma Thurman’s body double). She credits Suzanne Walker, former WSU dance instructor, for nurturing her artistic gifts.

“The craziest thing in the world is that Suzanne Walker gave me the opportunity to choreograph the 1991 spring musical in my final year at Wright State,” Douglas said. “I never fully understood at the time why she had such faith in me. It was the last show of the year, ‘Gypsy,’ and a big subscriber audience. Boy, did she have some serious insight to know that I would later go on to choreograph in the West End and internationally in opera, cabaret and musical theater.

Douglas currently choreographs gala events and shows throughout England. Her most recent assignment was a project for P&O/Cunard/Carnival Cruise Lines about Dusty Springfield. She remains grateful for the instruction she received at WSU.

“I could not have imagined any better training than the training I received at Wright State,” she said. “One of the greatest things I talk about to this very day is how my training taught me versatility. All of my tutors stressed the importance of this. I realize how lucky I was to learn different styles within each discipline and not just in the execution of the style, but the history and importance of it in every decade that was being taught.

“Most drama colleges do not have the time or staff to be able to cover such things as well as Wright State. The staff I had throughout my time there was exceptional. I owe so much of who I am as a professional to my tutors. Of course every experience working after college helps you to grow and learn, but Wright State really prepared me for ‘the business we call show.’”

“The show has an open-ended run at the Prince of Wales Theatre,” said WSU artistic director W. Stuart McDowell. “When I saw it last year the place was packed to the rafters (and Hippensteel) received a standing ovation.”

Lastly, Grammy-nominated pop star and reality TV judge Nicole Scherzinger, dynamic in 1997’s “Chicago” and 1998’s “Show Boat,” was nominated for the 2015 Laurence Olivier Award (the London equivalent of the Tony Award) for her portrayal of Grizabella in the revival of “Cats.”

“I was blown away by her performance,” McDowell noted. “Sir Andrew Lloyd Webber has called her one of the best singers he’s ever heard.”