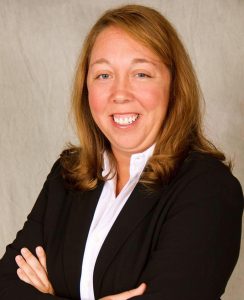 After years practicing internal medicine at a Veterans Affairs medical center in Virginia, Kyle Horton ’08, M.D., began to see how the health care system was failing veterans. Armed with a business degree earned through the Wright State University Boonshoft School of Medicine’s Physician Leadership Development Program, she decided to run for Congress to try and fix the system.

“I saw patients harmed or nearly harmed by extended wait times, missed cancer screenings or inaccurate diagnoses,” said Horton, who is campaigning to represent North Carolina’s 7th District, which stretches from Wilmington and the South Carolina border to the south Raleigh suburbs. “Empathizing with the struggles of these patients harmed by a system, I wanted to help ensure that we don’t repeat the same mistakes from the Vietnam era in the care of future generations of veterans.”

Part of that desire sprang from Horton’s upbringing in a family with a long history of service in the United States Armed Forces. It was strengthened during her time training medical residents and providing care to veterans of the wars in Afghanistan and Iraq.

Her experiences led her to advocate for veterans’ health care and mental health. Horton contributed to the passage of the Clay Hunt Suicide Prevention for American Veterans Act and has worked on other initiatives important to veterans.

“I’ve also been working on policy solutions to advance opiate safety for veterans, prevent suicide in female veterans and address toxic burn pit exposure for young veterans, which is like the Agent Orange for many who served in the Middle East,” said Horton, who is running as a Democrat.

“In truth, now, I feel the most pride that I’m fulfilling the Hippocratic Oath of any point in my career,” Horton said. “I’m fighting every day to protect Americans’ access to life-saving care.”

She suggests that medical students have a frank conversation with themselves about the desires they have for their future careers.

“You never know how you’re going to use earned knowledge and experience in your life,” Horton said. “I never knew I would feel called to get involved in this way, but having the dual backgrounds in business and medicine put me in a position to make a genuine difference in policy.”

She is running in the May 8 primary election. If she secures the Democrat nomination, she will likely face incumbent Rep. David Rouzer, a Republican, in the general election on Nov. 6, 2018.