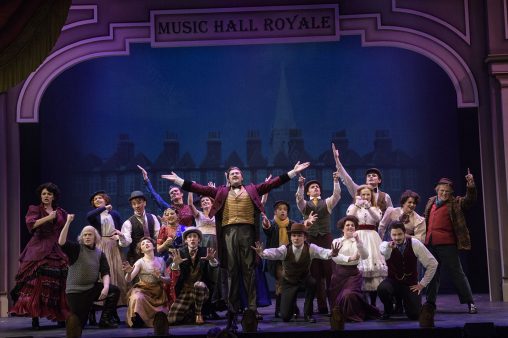 Wright State Theatre’s production of “The Mystery of Edwin Drood” runs from March 15 to April 8 in the Festival Playhouse. (Photos by Erin Pence)

Wright State University Theatre concludes its 43rd season in the Festival Playhouse with the Tony Award-winning musical “The Mystery of Edwin Drood” from March 15 to April 8.

Tickets are $22 for adults and $20 students and seniors. For tickets and theatre information call the Box Office at 937-775-2500, or purchase single tickets online.

“The Mystery of Edwin Drood” is inspired by the unfinished novel by Charles Dickens. “Drood” became a Broadway hit, winning Tony Awards for Best Musical, Best Book and Best Score, all by Rupert Holmes, in 1986.

During the tune-filled musical, the audience determines the ending of the show, guaranteeing a unique performance each night. Dickens died before he was able to finish the novel, so audience members vote on who murdered Edwin Drood.