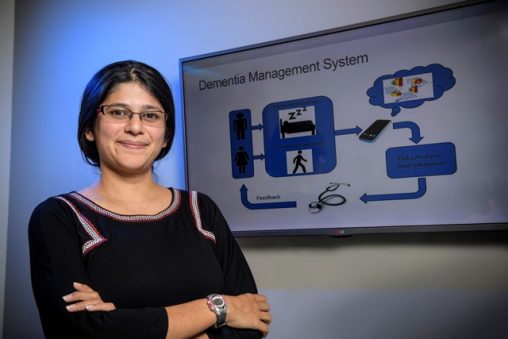 Wright State professor Tanvi Banerjee was recognized by a British online publication for her research detecting burnout among those who care for dementia patients. (Photo by Erin Pence)

Wright State University’s Tanvi Banerjee, who has taken a creative approach to detecting burnout among those who care for dementia patients, is featured in a special Women in Science issue of Research Features Magazine, a British-based online publication.

Banerjee, an assistant professor of computer science and engineering with Kno.e.sis, Wright State’s Ohio Center of Excellence in Knowledge-Enabled Computing, is among a group of top female scientists the magazine showcases in its March 8 issue to coincide with International Women’s Day.

The magazine is produced by Research Publishing International, a media agency that specializes in working with scientists and researchers around the world.

The Women in Science issue is designed to celebrate the work being conducted by women around the world, highlight the importance of a diverse workforce and examine the challenges currently facing female researchers.

The issue features women researchers working in a variety of fields and includes a special roundtable feature article titled “Why are women still underrepresented in the world of scientific research? What needs to be done to tackle this?”

“The glass ceiling is at its thickest in STEM fields,” said a note from the publisher. “The women we feature in this issue work in diverse areas of research and we hope that their stories will inspire the next generation of researchers. We have purposefully focused on the research carried out by each of these women: we want to celebrate their successes and explore the varied contributions they are making to the world of research.”

The two-page article devoted to Banerjee and her work includes three color photographs, a graphic illustrating her dementia management system and a question-and-answer section.

Banerjee’s research involves the use of a gaming app as a way to identify burnout among dementia caregivers.

The project began in 2014 and last year received a three-year, $500,000 grant from the National Institutes of Health. The study has tested a commercial sensor called the Hexoskin vest with 40-and-older adults and will involve as many as 20 patient/caregiver couples for a longer-term study.

The study led by Banerjee and Jennifer Hughes, an assistant professor of social work, investigates how to use technology in a non-intrusive way to monitor chronic conditions of dementia patients and to measure the stress on the caregiver.

Hughes says leaders in the field of dementia-related illness are interested in developing technology to assist caregivers beyond existing technology that helps with things such as medication management and appointment reminders.

One aim of the study is to detect changes in activity patterns of patients as well as changes in their behavior such as agitation, depression and apathy by using wearable sensors such as the vests that measure heartrate and breathing. The hope is it will result in a deeper understanding of the causes of mood and behavioral changes and provide opportunity for early intervention.

Community and social workers would then step in by offering additional resources for the caregivers such as offering daycare services to give them a break or bringing meals into the home.

Banerjee said the technology is a nonintrusive and less expensive approach to detecting changes in caregivers and their patients. And she said the relaxation effect of playing Word Scramble might in itself prove to be a respite from the caregiving duties, possibly in itself an effective intervention. She anticipates additional games being added to the mix.

In November, Hughes and Banerjee showcased their research and provided a demonstration of the gaming application during Annual Science Night hosted by the Alzheimer’s Association Miami Valley region in Dayton. About 330 people attended, including caregivers, community workers and researchers studying Alzheimer’s.