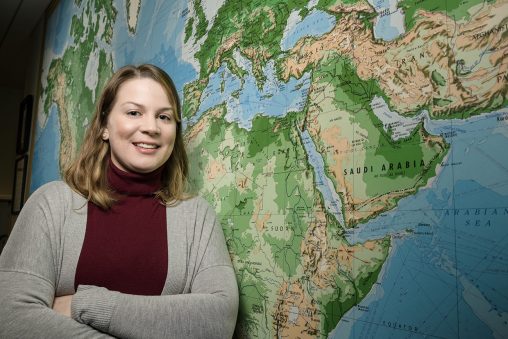 After graduating from Wright State with degrees in international studies and international and comparative politics, Kathryn Chaney now helps prepare military personnel and other government employees for embassy assignments in Europe. (Photo by Erin Pence)

Military personnel and other government employees preparing to be posted to U.S. embassies in Europe will likely run across Wright State University alumna Kathryn Chaney. She helps staff the Europe Desk at the Defense Institute of Security Cooperation Studies.

The institute, located at Wright-Patterson Air Force Base, provides professional education, research and support to advance U.S. foreign policy through security assistance and cooperation. Its regional studies courses give military students knowledge about the countries to which they are assigned and prepare them to interact with foreign and U.S. dignitaries.

Chaney collects resource materials for the students, scanning newspapers and other publications for information on current events, politics and culture. She also fulfills requests from individual students, who may, for example, want information about a certain government organization in the Ukraine.

“My favorite aspect of the job is just helping the students,” said Chaney, who in March began a new job as a logistics management specialist. “It’s really fulfilling doing research for them that helps them better understand something so that when they go over to the embassies they feel confident they know what’s going on and can do their jobs.”

Chaney became interested in international affairs and other cultures when she was at Waynesville High School, inspired by her Spanish teacher, who was from Spain.

In 2009, Chaney enrolled at Wright State in the International Studies Program and traveled to Spain and Morocco in 2011 as part of a study-abroad ambassador program.

The trip focused on human rights issues, and Chaney visited an orphanage in Morocco and spent time with organizations that worked with Gitanos, an itinerant ethnic people in Spain. The following year Chaney returned to Spain to immerse herself in Spanish at the University of Salamanca.

“That furthered my interest in different cultures and people,” she said.

After earning her bachelor’s degree in international studies in 2012, Chaney took a bit of a detour. She moved to Los Angeles, where she interned and worked while doing a merchandise marketing program at the Fashion Institute of Design and Merchandising.

Chaney learned about the business side of fashion. She worked with a Vietnamese designer in a showroom in downtown L.A., in production and doing materials research and development.

“I interacted with people from around the world, in China and Korea, checking up on seeing when materials were coming in,” she said. “And I was interested in some of the human rights aspects of fashion and fashion companies that hopefully are promoting good, helping people, helping women around the world. I definitely looked more into that while I was at the fashion institute.”

After receiving her associate degree, Chaney returned to Wright State. She enrolled in the International and Comparative Politics Program focused on the Global Gender Studies track, in which she earned her master’s degree in 2017.

Chaney began working at the Defense Institute of Security Cooperation Studies while she was still at Wright State, using the experiences she had in Spain.

December Green, professor of political science and chair of Wright State’s School of Public and International Affairs, said Chaney is a great role model for students.

“She shows how the combination of intelligence and determination can pay off with a job offer in her field — prior to graduation,” said Green.

Laura Luehrmann, professor of political science and director of the M.A. Program in International and Comparative Politics, said part of what she finds so inspiring about Chaney’s path is that she has been able to weave together her passions, work experiences and academics to develop expertise that is grounded and meaningful.

“We often talk about ‘beyond the classroom’ learning. Katie exemplifies this,” said Luehrmann.

Chaney recently received a congratulatory “shout-out” from the World Values Survey Association, which conducts international surveys to identify the values in various countries. The association applauded Chaney for her master’s thesis, which looked at the economic empowerment of women in India and Bangladesh.

“Completing an M.A. thesis is such an arduous task, and this pat on the back, is affirmation of her many months of diligent work,” said Luehrmann.

Chaney said Wright State has given her a tremendous experience.

“We have great professors in political science and international studies,” she said. “And I’ve had so many great opportunities at Wright State.”