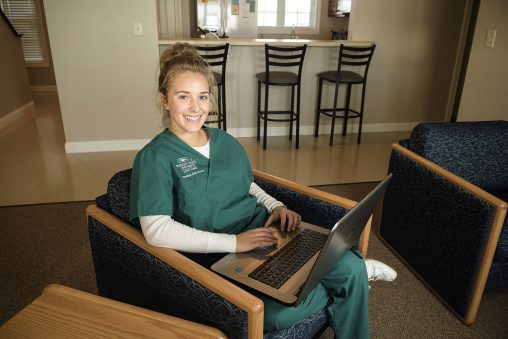 Richardson is one of 100 students who live in the stylish, townhouse-style apartments that nuzzle up to Grand Lake St. Marys.

“The lake is awesome; it’s really pretty,” she said. “It’s not like most college campuses.”

Richardson lives in East Villa, new apartments finished last fall. The first apartments at Lake Campus were built in 2011, the second in 2013.

Richardson elected to live on campus to avoid having to commute from home, about an hour’s driving time each way. She lives with four other students, each of whom have their own bedroom and share a full, modern kitchen.

“I like how it is actually an apartment and not a dorm type of feel,” she said, adding that having her own bedroom gives her some privacy. “We can shut our door and really focus and study and don’t have to worry about outside distractions.”

The backyards are frequent gathering spots for playing football or throwing Frisbees.

“You really get to know a lot of people and make new friends. Since everybody is right next door, it’s kind of like a big family,” she said. “…It just makes me feel like I didn’t go far; I’m still kind of at home.”

Richardson grew up in Alger, Ohio, a village of about 900 people east of Lima. Her family farms about 2,000 acres, growing corn and soybeans. Her mother is the director of Bethel Christian Pre-School.

“It’s just one of those things I always knew I wanted to do,” she said. “I’ve always been people-centered, and that’s really what nursing is.”

East Villa features private bedrooms for each townhouse’s resident, a full, modern kitchen and relaxing back porch that overlook the lake.

Richardson works at a nursing home in Cridersville and substitute teaches at Bethel Christian Pre-School.

She wants to get her bachelor’s degree in nursing and then her master’s so she can become a nurse practitioner, an advanced practice nurse who has more clinical independence and authority than some other types of nurses.

Richardson would like to use her nursing skills on medical mission trips. She has already been on two mission trips to a Navajo reservation in Arizona and one to Haiti.

Richardson’s nursing classes are small, enabling her to meet one-on-one with the professors if necessary.

“If I need to talk to a professor, I can just walk on over,” she said.