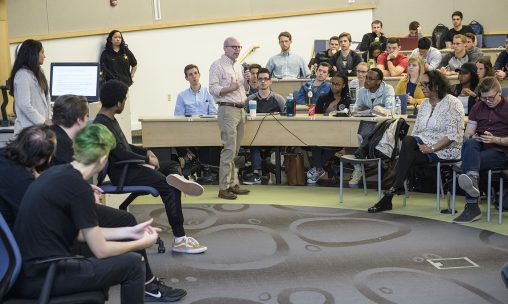 Paul Hershberger, director of the Division of Behavioral Health in the Department of Family Medicine at the Boonshoft School of Medicine, facilitated a discussion during a theater event about discrimination in the medical field.

More than 100 medical students and others gathered in Gandhi Auditorium of White Hall at the Wright State University Boonshoft School of Medicine on April 13 to participate in an improv event, “What Would You Do?”

The event featured Wright State University theatre students acting out scenarios of discrimination against different minority groups, including Muslim Americans, African Americans, Latino Americans and members of the LGBTQ community. Students and audience members discussed the best ways to stand up against the various forms of discrimination.

Led by We’am Hussain, a fourth-year medical student, the event was part of the medical school’s WrightCurriculum for first-year medical students. The improv theater was based on real-life situations. A guest panel included several people from Wright State with a broad range of expertise in counseling, diversity, law and sociology. The panel also included Montgomery County Sheriff Phil Plummer. The guests on the panel participated in the discussion.

The improv event grew out of a desire by Hussain and other medical students to help encourage discussion about a critical problem that is arising in an increasingly diverse community. This is the second improv event Hussain has led.

“Many individuals feel victimized because they are misunderstood due to the biases which exist in society. This was an opportunity to give a voice to the vulnerable and most misunderstood members of the community,” Hussain said. “It gave students an opportunity to reflect on how they would feel if they were victimized in a similar manner. It also made them think about effectively stepping up for someone when they see that person is a target of discrimination.”

The discussion was facilitated by Hussain and Paul Hershberger, Ph.D., professor and director of the Division of Behavioral Health in the Department of Family Medicine at the Boonshoft School of Medicine.

It is important for first-year medical students to understand that discrimination occurs in the medical education community. “It is the responsibility of each one of us to avoid perpetuating discrimination and to address it through means available to us,” Hershberger said.

“As physicians, we will be working with diverse groups of people,” said Ben Clouse, a first-year medical student from New Riegel, Ohio. “We need to be able to understand our patients’ life circumstances. This setting creates a safe space to learn about people’s experiences and how we can better serve them.”

Courtney Smith, a first-year medical student from New Richmond, Ohio, agreed. “The improv allowed us to put ourselves into the situation,” she said. “We need to be able to treat patients without prejudice or biases.” 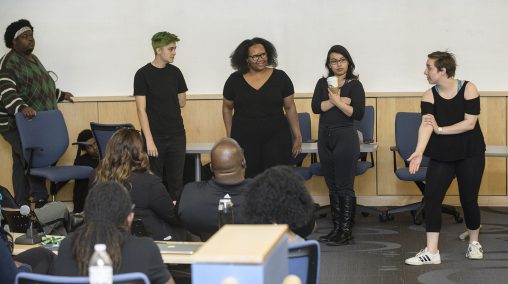 The medical school plans to include the “What Would You Do?” improv session next year in its curriculum for first-year medical students. Although Hussain is graduating from medical school, she will continue to provide leadership for the session as a medical resident completing her internal medicine residency at the Boonshoft School of Medicine.

Hussain also has been researching bias and discrimination along with her sister, Anam Hussain, an M.B.A. student at the University of Dayton. They presented their research at a national meeting of the Academy for Professionalism in Health Care in April in Baltimore. In June, they will present a research forum at the Academy of Communication in Healthcare in Tampa, Florida.

“This work is very important because discrimination remains commonplace in society and the medical workplace,” Solomon said. “Medical students need tools to help build resilience in dealing with these challenges. These exercises can help them prepare for potential situations where they observe or experience discrimination.”

Solomon said their work may give other institutions a tool for teaching about discrimination.

“By presenting at national meetings, they will get their work out to a national audience of educators who focus on professionalism and health care communication,” he said.