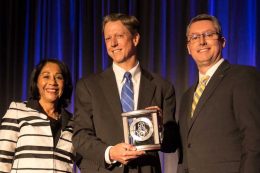 A lawyer for Wright State University has been given a top honor by the United Way of Greater Cincinnati.

Mike Manzler, WSU associate general counsel, was recently awarded the 2018 Ruth W. and Robert I. Westheimer Award for Continuous United Way Leadership, according to the school. The Westheimer award is given to people who have been in long-time leadership positions for the United Way and have offered leadership through a variety of activities.

Manzler has served on the United Way of Greater Cincinnati’s human resources committee since 1998 and has been chairman of the committee since 2004, according to the university.

Manzler is also member of the United Way of Greater Cincinnati executive compensation committee and has served as a member of the organization’s accountability and services cabinet, which supports financial transparency and compliance.

“I’m tremendously grateful to the United Way of Greater Cincinnati, not just for the honor of this award, but for the opportunity to have worked with and supported such a terrific organization filled with so many dedicated people for so many years,” he said.

At Wright State, Manzler represents and advises the administration, colleges and academic departments. He counsels and represents Wright State in matters of equal employment opportunity and other human resources policies among other things, according to the university.