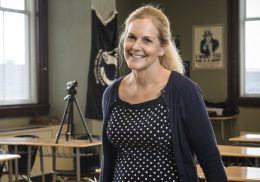 Bridget Federspiel works with both high school students and Wright State student veterans to interview U.S. veterans for the Library of Congress.

“I bought a videocamera from the pawn shop downtown, and we had a tape recorder,” she said. “We collected 50 interviews the first year.”

The interviews can be a lot of work. When they are conducted at the homes of the veterans, Federspiel must transport her student interviewers because they are too young to drive. Each interview must be 30 minutes long. There is paperwork to do, photos to be taken and the interviews burned to CDs and DVDs.