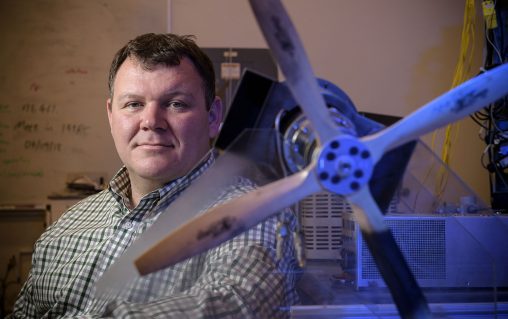 The senior design class taught by Rory Roberts, associate professor of mechanical and materials engineering, gives students state-of-the-art lessons in propulsion, hands-on experience and interaction with industry and military engineers that put the graduating students on the inside track as they start their careers. (Photos by Erin Pence)

One of his graduates is a lead propulsion engineer for Virgin Gallactic, working to help the company make space travel and tourism a reality. Others work at the Air Force Research Laboratory and General Electric’s jet engine division.

Rory Roberts, associate professor of mechanical and materials engineering at Wright State University’s College of Engineering and Computer Science, is a power guy.

And students who go through his senior design class get state-of-the-art lessons in propulsion, hands-on experience and interaction with industry and military engineers that put the graduating students on the inside track as they start their careers.

He worked for Rolls-Royce on gas turbine engines and fuel cell development before joining the faculty at Wright State in 2009.

Students in Roberts’ senior design class must complete a design project and master skills in management, teamwork, communication and proposal-writing along the way.

In some of the projects, students have used a small gas turbine engine provided by the Air Force Research Laboratory as part of the Aerospace Propulsion Outreach Program to attract more engineers to the field.

Gas turbines have blades that spin at high speed and compress the air, which is sprayed with fuel and ignited. The burning gases expand through a turbine and blast out through the nozzle at the back of the engine, creating thrust.

In one project, students built a turbine engine with a propeller — a turboprop.

“They knew nothing about a gas turbine, and they designed and fabricated everything in the machine, hooked it up and ran it,” said Roberts. “The fact that we were able to take it to AFRL, test it and get it running — I think AFRL was very shocked and surprised.”

The project later evolved to hooking up the engine to a solid-oxide fuel cell, a concept for advanced hybrid electric propulsion for the next generation aircraft. The cells produce electricity directly from oxidizing a fuel. Benefits include high efficiency, long-term stability, fuel flexibility and low emissions. 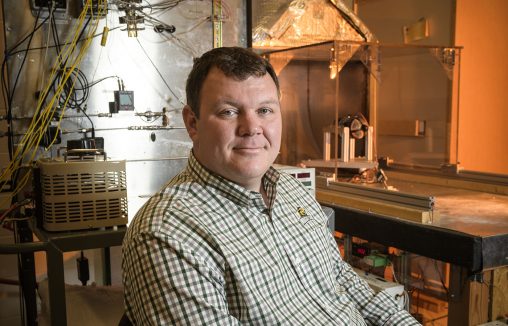 Other projects include electrical power production for hypersonic vehicles that could also extend the range of unmanned aerial vehicles.

“They’ve been pushed,” he said. “They realize the answer is not in the back of the book. There are infinite answers to every problem. The best solution depends on the resources that you have.”

The students benefit from Roberts’ connections to the Air Force and industry. And students are being taught to look at the entire design process in aerospace propulsion and understand how each of the systems interacts with each other.

“They are using techniques and approaches that are not typically taught at all,” said Roberts. “These are skills that industry has been looking for and don’t typically exist in the curriculum at universities today.”

Roberts believes that his students are a year or two ahead of other graduates as they head off to their careers.

“They are ahead in the sense that they are directly addressing needs that the industry has today and hopefully the needs of tomorrow,” he said.