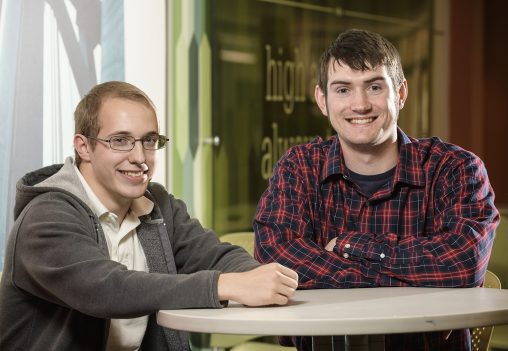 Military work is in the cards for Wright State University engineering students Trevor Nartker, Ivan Frasure and Jace Robinson — at least for the near future. All have received prestigious SMART scholarships from the Department of Defense.

The SMART program aims to increase the number of civilian scientists and engineers working at Department of Defense laboratories.

Located at Wright-Patterson Air Force Base, AFRL is a scientific research organization dedicated to the discovery and development of aerospace warfighting technologies.

The military runs in the families of both Frasure and Nartker. One of Nartker’s brothers is a second lieutenant in the U.S. Army stationed in South Korea.

Nartker said the SMART scholarship gives him an opportunity to work for the Defense Department.

“Mostly it’s a chance to get school paid for and serve my country,” he said.

SMART stands for Science, Mathematics and Research for Transformation. It is part of the National Defense Education Program and was established by the Defense Department to support college students pursuing degrees in science, technology, engineering and math disciplines.

Frasure is thrilled with the scholarship.

“The SMART scholarship is awesome. I wanted to focus on science, but I still wanted to serve my country,” he said. “It was a good mix — serve the country while pursuing science.” 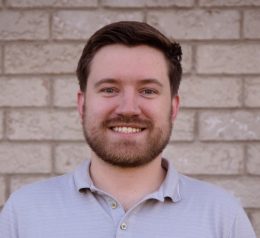 Robinson will work in AFRL’s Sensors Directorate, completing research in the field of artificial intelligence.

“Through the clever use of mathematics, statistics and computer science, we can program computers to automatically draw insights and make decisions from large amounts of data,” said Robinson. “This is the same technology that powers the iPhone X’s ‘Face ID’ technology and allows self-driving cars to recognize street signs.”

Robinson grew up in Jamestown, Ohio, and graduated from Greenview High School in 2012. His two older brothers graduated from Wright State’s Raj Soin College of Business, and Robinson received a full-tuition scholarship.

He began pursuing a degree in applied mathematics but became interested in computer science after taking a programming course.

“I realized the immense ‘power to create’ a programmer has,” he said. “I learned mathematics provides the tools to precisely describe and solve important problems, while programming is how you actually implement and follow through with solutions.”

Frasure grew up in Centerville, the youngest of 11 children. After being home-schooled, he enrolled at Sinclair College and later transferred to Wright State, using a variety of scholarships to cover his Wright State education.

Both he and Nartker also currently conduct research for the Air Force Institute of Technology, a graduate school at Wright-Patterson that provides professional and continuing education for the military.

Nartker grew up in Bellbrook. His father is a paramedic on the Bellbrook Fire Department, and his mother — a Wright State graduate — works at a hospital as a medical technician.

Nartker was recognized as a math whiz early on, getting bumped up in math classes when he was only in fourth grade. After taking several computer science classes in high school, the two disciplines came together for him.

Nartker loves the predictability of computers.

“Computers don’t do things that they’re not told to do,” he said. “They are very procedural and logical. If there is some sort of problem, you can trace it back through the code.”

Nartker is interested in a career in the defense industry or possibly with the FBI.

While Nartker and Frasure share a passion for computers, their outside interests couldn’t be more different. Frasure likes to read history, especially books about the ancient Greeks and Romans. Nartker likes to work on his 1973 Chevelle, one of Chevrolet’s most popular nameplates.