Electrical boxes paved the way for Wright State communications staff and photographers who were honored for the third consecutive year in the 2018 Ohio’s Best Journalism Contest.

The story was a team effort. It was written by Jim Hannah, assistant director of public relations, featured a video by Kris Sproles, video content producer, with photography by Erin Pence, university photographer, and Chris Snyder, photography coordinator.

The story highlighted 11 electrical panels nestled in the Wright State Nutter Center that have been signed by performers who have come to Wright State. Some of the more notable autographs include KISS, Keith Emerson, Martina McBride, Lenny Kravitz, Howie Mandel, Dan Fogelberg, Lee Greenwood and Scott Hamilton.

The judges called “Signature Act” an “excellent hiding-in-plain-sight story. The fun details and oral history — and then showing via the video — illustrate the venue’s significance better than a typical feature could.”

“Signature Act,” was published on the Wright State Newsroom in January 2018. The Dayton Daily News published the story a week later. 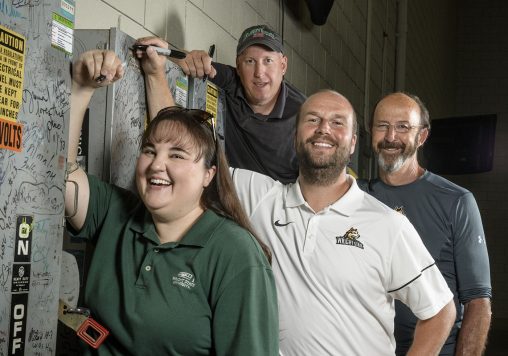 In previous years, Wright State communications staff and photographers have won awards for stories about Wright State’s campus and community, including stories about military exercises for Wright-Patterson Air Force Base and maintaining sidewalks on campus.

Ohio’s Best Journalism Contest was sponsored by the Cleveland, Cincinnati and Columbus Society of Professional Journalists chapters. Other competitors included major newspapers, broadcasters, radio stations and colleges from across the state. Each year, hundreds of journalists submit their work on topics ranging from criminal justice to sports to business reporting.

Seth Bauguess, director of communications, said it is impressive that Wright State employees have won awards while competing against mainstream media members.

“I am so proud of the great storytelling that these professionals produce and how it shines a bright light on the day-in-and-day-out activities of Wright State and it’s people,” he said. “When you look at who is competing for these awards, it’s all journalists working for news organizations across the state. Hundreds of them. But our colleagues here at Wright State, for the third year in a row, are right there competing and winning awards too. I think that really says a lot about the quality of their work.”