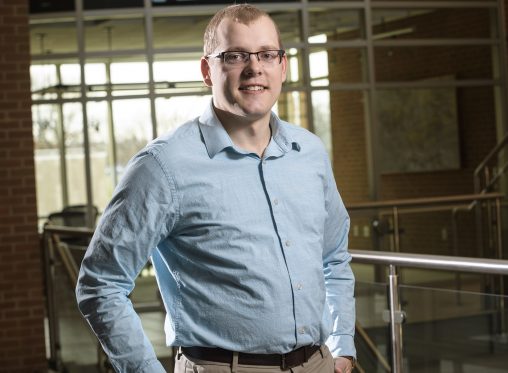 Volunteering as vice president of the Autism Society of Dayton is one way School of Professional Psychology student Brandt Ling gives back to the community. (Photo by Erin Pence)

When he arrived at Wright State University after graduating from college in Nevada, Brandt Ling was looking for a way to give back to the community and had an interest in autism.

So the School of Professional Psychology student began attending meetings of the Autism Society of Dayton. Now he’s vice president of the organization.

“They’ve been marginalized by society and they need people who are going to be there in their corner,” he said. “They just need a little extra help is all.”

Autism is a developmental disorder characterized by troubles with social interaction and communication and by restricted and repetitive behavior. It is estimated to affect more than 24 million people worldwide.

Ling said the Autism Society of Dayton is a great organization with two primary purposes.

“We give grants to families if they need help funding therapy for their child, or materials or anything that’s related to the diagnosis,” he said.

The group also hosts events such as flag football, soccer games or renting out a waterpark.

“It provides a nice way for families, and children and adults on the autism spectrum to interact and have some fun,” he said.

Ling grew up in Reno, Nevada, the son of parents who are both social workers. He earned his bachelor’s degree in neuroscience at the University of Nevada-Reno in 2015.

“I’ve always had a fascination with behavior and how the brain dictates behavior,” he said. “It was a natural major for me to pursue.”

Ling said he was attracted to Wright State’s School of Professional Psychology because it is a leader in its field.

“It has an emphasis in neuropsychology that I wanted to pursue. And it had diversity as its mission,” he said. “It’s very focused on diversity and providing care to everybody.”

After graduating with his Psy.D., Ling plans to pursue a career in pediatric neuropsychology.

“I think that’s the most fun thing you can catch,” he said. “And there is so much water here compared to Nevada.”