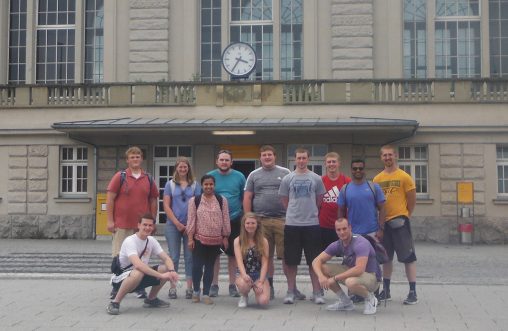 Students from the Wright State Lake Campus studied engineering at the University of Applied Sciences in Jena, Germany, this summer.

Hance said he was excited to give the students of Wright State’s Lake Campus a chance to expand their horizon by traveling to another country.

Most of the students do not speak much German, so they spent part of their time at the University of Applied Sciences learning German. While some students had taken German in high school, others relied on apps like Duolingo to learn some German before they went.

Johnson said that he did not take any German classes before the trip and was surprised by the number of people who understood English. “I did not realize the emphasis placed on learning multiple languages in German education,” he said.

The students took classes on microprocessors, theory and control of electric drives, computer programming and microcontroller technology. They also participated in a robotics competition with the German students.

Hance said one of the challenges of the trip was adapting to the classrooms in Germany, many of which only utilize natural light and do not have air conditioning. In addition, this summer has been the hottest in Germany in 135 years.

Many students said they looked forward to experiencing German culture and food. While some were nervous about traveling outside of the country, that fear quickly evaporated during their visit.

Throughout the trip, which took place from May 31 to June 29, the students got the chance to go sightseeing. Many enjoyed seeing the base of the Alps. Aaron Neikamp, a dual mechanical and electrical engineering major, said he does not often see mountains.

“Being able to see a small portion of the Alps and their sheer size is a sight that should not be taken for granted,” he said.