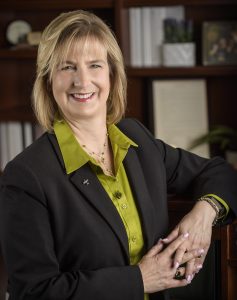 The Executive Committee of the Wright State University Board of Trustees met with President Cheryl B. Schrader in executive session, July 23, to review her first year in office at the university.

“It was a very positive meeting,” said Fecher, noting the difficult situation Schrader found herself in and the many challenges facing Wright State when she joined the university in July 2017.

The committee reviewed with Schrader her many accomplishments over the last year and thanked her for her commitment to the financial sustainability and well-being of the university. Comments provided by the committee were made on behalf of the Board of Trustees.

The committee recognized that under Schrader’s leadership, Wright State reduced spending by more than $50 million and produced the university’s first operating surplus since at least 2012. The university expects to end fiscal year 2018 with an operating surplus of more than $7 million, an increase in cash of approximately $9 million and a projected year-end reserve of approximately $51 million.

Schrader and the committee agreed that much work remains to be done.

“Our focus continues to be two-fold,” said Schrader. “Not only must we maintain the financial discipline and accountability developed in 2018, but we must focus relentlessly on building enrollment and revenue for the future.”

The Executive Committee noted that Schrader made many difficult decisions during the year but strived to ensure academic excellence remained a top priority. Despite the cuts in expenses, Wright State graduated 3,885 students in the 2017–18 academic year and no academic programs were eliminated in the latest budget for fiscal year 2019. Wright State continues to offer among the lowest tuition rates of any public university in Ohio for in-state undergraduate students.

The committee also highlighted other examples of Schrader’s leadership, including her leadership in creating a new strategic plan, which will be presented to the Board of Trustees in October; her commitment to improving communication on campus; and her ability to make difficult and sometimes unpopular decisions under trying circumstances.

Schrader and the board agreed that given the circumstances facing all other university employees, Schrader would not accept a merit increase or incentive payment for her work in her first year as allowed for in her contract.

“Everyone at Wright State has had to sacrifice,” Schrader said, referring to the financial aspects of her contract. “As we keep on track financially, rebuild reserves and work toward increasing revenue, those things will take care of themselves.”