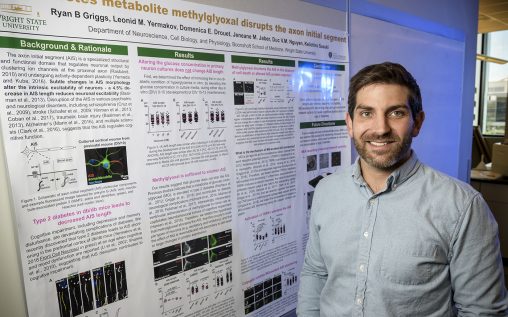 Research showing that changes in neurons in the brain may be responsible for cognitive dysfunction associated with Type 2 diabetes won a best poster award for Wright State University postdoctoral researcher Ryan Griggs.

Griggs was honored with the Best Poster Award for Postdoctoral Fellows at the 15th annual Neuroscience Day sponsored by the Ohio Miami Valley chapter of the Society for Neuroscience. This regional conference took place at Miami University on May 25.

The Society for Neuroscience, a Washington, D.C.-based entity, is a professional organization for basic scientists and physicians whose research focuses on the study of the nervous system. It is the largest neuroscience society in the world, with nearly 37,000 members.

“It reinforces that communicating our research to a diverse audience is an important skill,” he said, adding that presenting the poster helped initiate new collaborations with neuroscientists at Miami University.

Griggs works in Wright State’s Nerve Myelination and Disease Lab, which is run by Keiichiro Susuki, assistant professor of neuroscience, cell biology and physiology. So far this year, the lab has published three research articles in peer-reviewed academic journals.

“We had two manuscripts accepted for publication on the same day,” Griggs said. “That never happens.”

The lab is studying “axonal excitable domains,” which are essential for proper nervous system function because they enable neurons to regulate and efficiently transmit electrical signals.

“We study the disruption of these excitable domains in disease,” said Griggs. “How does that happen? What’s the mechanism of that? How can we treat that?”

Griggs’ background is in the study of diabetic pain and methylglyoxyal, an organic compound that contributes to neurological dysfunction in diabetic patients.

Diabetes is a group of metabolic disorders in which there are high blood sugar levels over a prolonged period. It is caused by the pancreas not producing enough insulin or the cells of the body not responding to the insulin produced. Long-term complications can include cardiovascular and kidney disease, stroke and neurological dysfunction. 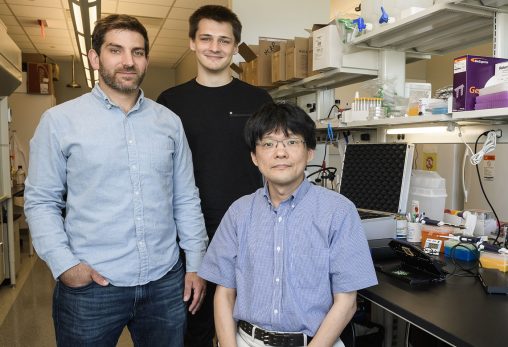 In the past decade, the number of Americans living with diabetes jumped almost 50 percent to more than 30 million, or 9.4 percent of the population, according to the American Diabetes Association.

“We know that diabetes is associated with neurological dysfunction, which can manifest itself as pain or depression,” said Griggs. “You can also get deficits in memory.”

Griggs and Leonid Yermakov, an M.D./Ph.D. student in the Boonshoft School of Medicine and one of Griggs’ lab partners, recently published that disruption of the axon initial segment, an excitable domain within neurons important for proper function, is associated with the development of diabetes in mice. Their latest research, which won the best poster award, suggests that methylglyoxal disrupts this part of the neurons important for their function.

“The significance of our finding is that changes in neurons in the brain may be responsible for neurological complications associated with diabetes,” said Griggs. “If we can find a way to treat the disruption of this part of the neuron, such as by targeting methylglyoxal with newly developed therapeutics, then perhaps that will be able to treat cognitive impairments in people with diabetes.”

Griggs said their results could also apply to other diseases.

“If we can figure out how the neurons are changed in diabetes, maybe some of those mechanisms are shared by diseases such as Alzheimer’s or multiple sclerosis that are more difficult to manage,” he said.

The changes in neurons Griggs and Yermakov observed in diabetic mice are a common feature of these other diseases affecting the nervous system.

The next step in the research is to look at how disruption of the axon initial segment in neurons changes the function of an entire network of neurons by using multi-electrode arrays to measure electrical signals.

Griggs grew up in the Grandview Heights neighborhood of Columbus, Ohio. After graduating in 2002, he enrolled at Drexel University in Philadelphia. He initially majored in education, then switched to biology.

“Somehow I ended up enjoying biology in college and then just kept going down that path,” he said.

As part of a co-op program at Drexel, Griggs worked for Sunoco at a refinery as an industrial hygienist, monitoring workers for any exposure to hazardous chemicals. After receiving his bachelor’s degree in 2007, he earned a master’s degree in biotechnology from the University of Pennsylvania while working at the pharmaceutical company Merck in the automated biotechnology department. In 2015, he earned his Ph.D. in physiology from the University of Kentucky, where he studied the neurobiology of pain.

“Pain is very relatable,” he said. “Its mechanisms span all aspects of physiology. It encompasses everything from a molecular, cellular level – networks and neurons – and of course the brain and how the sensory experience of pain changes our outlook on life. Everyone has experienced pain at some point, at least for a short period. Chronic pain is pretty devastating.”

After teaching biology at the University of Dayton, Griggs took his current postdoctoral position at Wright State because he wanted to join Susuki’s research team.

“I do science because I find it interesting,” he said. “I think our research is important for human health.”