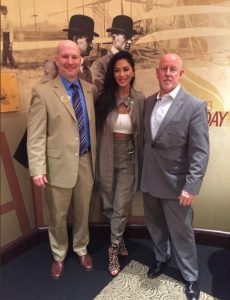 The former lead singer of the Pussycat Dolls absorbed as much as she could while a student at Wright State University.

“When I chose Wright State, I said I’m going to be a sponge and I’m going to get everything I can out of this. I took extra classes, and Wright State let me do that,” Nicole Scherzinger said, according to the university.

Scherzinger, who studied musical theater and dance at the Fairborn university from 1996 to 1999, received the 2017 Alumna of the Year Award from the Wright State Alumni Association today, Aug. 27.

She was unable to attend last year’s ceremony but was in town to receive her award today.

During her time with the Pussycat Dolls, the group was nominated for a Grammy for 2007’s “Stickwitu.”

The group lost to “My Humps” by The Black Eyed Peas for the Grammy Award for Best Pop Performance by a Duo or Group with Vocals.

Scherzinger has sold 37 million singles worldwide as a solo artist and with the Pussycat Dolls.