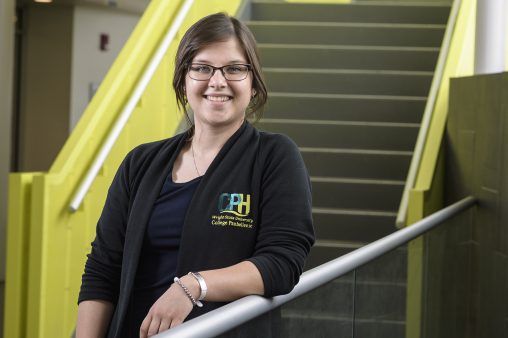 Participating in student organizations is one of Lauren Pelan’s favorite things about Wright State.

Lauren Pelan was born and raised around Wright-Patterson Air Force Base. Living only four miles away from Wright State, the university was the clear choice for school for her.

Today, Pelan is a senior majoring in electrical engineering who interns at Wright-Patterson, helping develop system models for various technologies.

“I’m learning a lot about electro-optics and radar and things I’ve never seen before,” she said.

“I’ve always been drawn to science and math. I really like the challenge of it and it gives me the opportunity to challenge myself,” she said.

As a woman in STEM, Pelan was encouraged by her sister-in-law to join Phi Sigma Rho, an engineering sorority on campus. Pelan loved Greek life and eventually became president of the Fraternity Sorority Council.

Pelan said the position of president took a lot of time and energy due to hosting and setting up events like Greek Week, a school supply donation drive, a penny war fundraiser for Puerto Rico hurricane relief and other events throughout the year.

Participating in student organizations is one of Pelan’s favorite things about campus.

One of her biggest achievements as the Fraternity Sorority Council president was the creation of the position of a diversity and inclusion chair for the council. Over the next year, Pelan hopes to host workshops for Wright State students with the university’s cultural and identity centers to talk about how to appreciate diversity and host an inclusive environment.

“We’re hoping to bring in a multicultural perspective to the Greek council and increase the diversity of our Greek Life,” she said.

“It was a really interesting experience to talk to people from a lot of different backgrounds,” she said. “It was a really impactful three days in that everyone was there for the common goal to better Wright State in any way we can, and it was cool to feel that in the room.”