Wright State University gave a warm official embrace to new Provost Susan Edwards with a welcoming reception in which she was described as a passionate educator with a growth mindset.

“She has hit the ground running,” President Cheryl B. Schrader told the gathering. “She brings such an energy and passion to her vocation. … Dr. Edwards has clearly left a positive impression on us in a short amount of time.”

Edwards said Wright State and the Dayton community have been one of the most welcoming she has ever experienced.

“I look forward to working with everybody as we move the campus towards its new future,” she said. “It’s exciting times. Difficult times are always exciting times in that they provide opportunity for growth. And it’s time for us now to take this opportunity to move Wright State into its next iteration and its next future.” 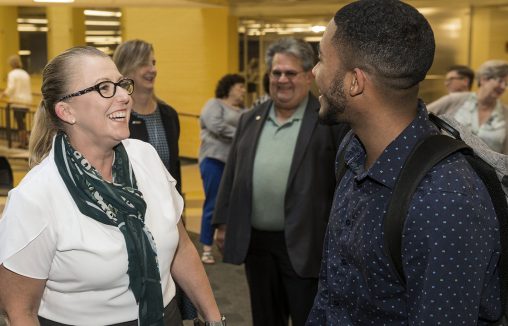 “I have met so many of them,” she said. “We are here to provide our students with the utmost transformational, educational experience that they can have. And I’m very pleased to say we have the faculty who can do that.”

It was the first time Lee Hannah, assistant professor of political science, had met Edwards. He said she is very personable.

“I think we have a lot of fresh perspective and new energy in this administration now,” Hannah said. “We’re enthusiastic just to see some creativity and the new plans that come forward. I’m optimistic and looking forward to what comes.”

“A growth mindset is really what allows you to take those challenges that we’ll always have, turn them into opportunity and just leverage them in a way that will help us move forward as a university,” Schrader said.

“I’m always mindful of what’s in the rearview mirror, but when I’m driving the car I am always looking forward,” said Edwards. “As an institution we have a lot to be proud of and we need to work together to move forward.”

Edwards sees her role at Wright State as making sure people have the tools they need to be successful.

“We need to be true to our mission and our values. That’s the reason I came here — the values of Wright State aligned with mine,” she said. “I think we provide an opportunity for students to get a high-quality education that can truly transform their futures. That’s what I’m happy to be part of.” 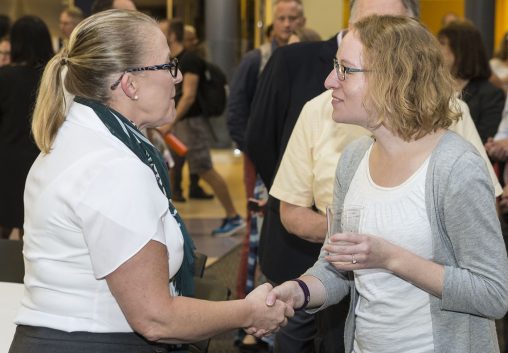 Provost Susan Edwards told the audience at the reception that Wright State needs to turn its challenges into opportunities that will help the university move forward.

Edwards was selected as provost after a four-month national search that included a diverse pool of approximately 50 candidates.

She had served as vice provost for faculty affairs and professor of biology at Appalachian State in Boone, North Carolina, since August 2015. She was responsible for overseeing all areas of faculty evaluation and development and served as the academic affairs liaison on all personnel matters.