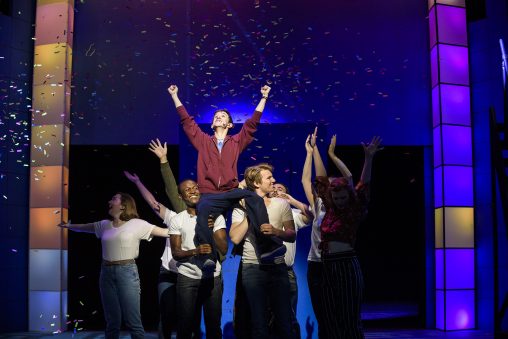 Wright State Theatre’s production of “The Curious Incident of the Dog in the Night-Time” runs in the Festival Playhouse in the Creative Arts Center Sept. 27 to Oct. 7. (Photos by Erin Pence)

Wright State University Theatre opens the 2018–19 season with the area premiere of “The Curious Incident of the Dog in the Night-Time” in the Festival Playhouse in the Creative Arts Center Sept. 27 to Oct. 7.

The story centers on a mystery surrounding the death of a neighbor’s dog investigated by Christopher Boone, a 15-year-old amateur detective who is on the autism spectrum and is a mathematical genius. The play explores Christopher’s relationships with his parents and school mentor.

“The Curious Incident of the Dog in the Night-Time” is directed by Marya Spring Cordes (“Grapes of Wrath,” “Music Man”), with combat choreography by Bruce Cromer. The set is designed by David J. Castellano, costumes by Courtney Michele, lighting by Matthew Benjamin, properties by Terry Webb and sound by James Dunlap.

Dayton Power and Light is the opening play presenting sponsor for “The Curious Incident of the Dog in the Night-Time.”

As part of the university’s production, Wright State has partnered with SICSA to promote animal adoption in the Dayton region. To learn more about adopting the dog featured in the production (or any pet), contact the SICSA Pet Adoption Center at 937-294-6505.