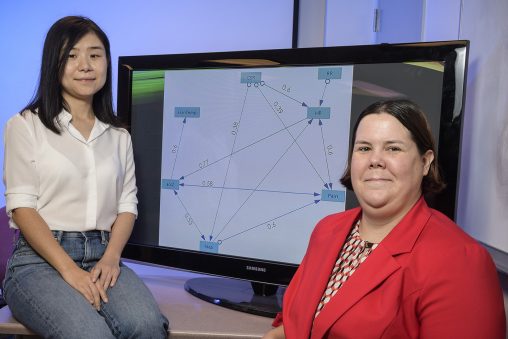 Fan Yang, who is pursuing her Ph.D. in computer science, and Michele Miller, who is working on her Ph.D. in environmental science, won the Datathon at Carnegie Mellon University’s Center for Causal Discovery. (Photo by Erin Pence)

“I haven’t done much causal research, so to get first place — especially since we were with a lot of professors and people who were more educated in this area than us — felt really good,” said Miller.

Yang and Miller as well as about a dozen teams from universities around the world attended a four-day class at the center in June. That was followed by the one-day Datathon, a competition in which the teams used their own biomedical data and the software provided by the center to create a model. They were judged on the amount of data used, the impact the model would have and how innovative they were in using the software.

Winning first place in the Datathon was a bit of surprise to Yang.

“I was really impressed by some other groups’ work,” she said. “But I think our results were good.”

“Winning the first prize is no small feat,” she said.

In sickle cell disease, red blood cells become sickle-shaped, causing them to clump together and stick to blood vessel walls. That leads to frequent painful episodes, which is one of the primary reasons for emergency department visits and hospitalization of patients.

The data used by Yang and Miller was collected from patients with sickle cell disease. Analyzing the data, which is part of Yang’s dissertation and the duo’s TRU-Pain project, included electronic medical records and self-recorded information from the patients themselves.

The TRU-Pain project is led by Nirmish Shah, director of the Sickle Cell Transition Program at Duke University. All of the patient data was collected by Duke University Hospital.

“We utilized all of this data from different resources to try to dig into it and to find a way to optimally control their pain, to try to provide better pain management,” said Yang, who is a student of Banerjee’s.

Specifically, the model that Yang and Miller developed at the center was designed to explain if and how different variables such as heart rate and body temperature affected the patients’ pain.

Yang and Miller learned that vital signs and other objective data can be used to model pain in sickle cell patients, finding some causal relationships between objective data and subjective pain. The duo next plans to use current physiological data to estimate future pain.

“Pain forecasting is very important in pain management since pain relief medicines take time to work,” they said. “Therefore, if we can forecast future pain, we can suggest medication usage in advance to help stop patients from feeling pain.”

Yang grew up in northern China, the daughter of parents who both work for manufacturing companies. After receiving her bachelor’s degree in China, she came to Wright State in 2012, where she earned her master’s degree and is now working on her Ph.D. in computer science. After graduation, she would like to work for a company or hospital to help improve health care by using data analysis.

Miller grew up in South Bend, Indiana. Her mother is a special education teacher and her father is a pharmacist.

After graduating from Penn High School in Mishawaka, Miller earned her bachelor’s degree in biology at the University of Indianapolis in 2014. She then came to Wright State to pursue her master’s degree in microbiology and immunology.

“I became interested in microbiology as an undergrad,” said Miller, who is a student at Wright State of William Romine, an associate professor of biological sciences. “I worked in a prep room where you set up all of the biology labs. And I got put in charge of the microbiology labs and kind of fell in love with the field.”

It was at Wright State that Miller took the Chemical, Biological, Radiological and Nuclear Defense series of courses, became certified and realized she wanted to do more with antiterrorism work. After earning her master’s degree in 2016, she began work on her Ph.D. in environmental science, but she is specifically interested in pursuing ways to stop bioterrorism. In 2017, she interned at Wright-Patterson Air Force Base, where she worked in a food defense lab.

This work is part of a recently funded grant (1R01AT010413) from the National Institutes of Health.