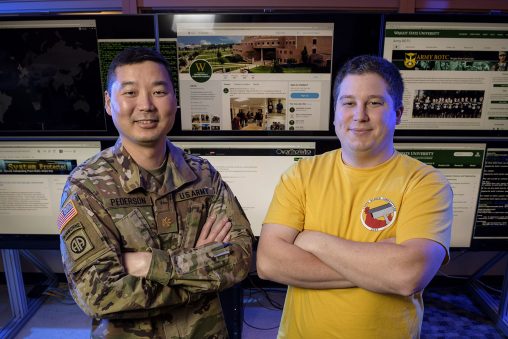 Wright State’s Army ROTC and the Department of Computer Science will host the Cyber Raider competition on Dec. 1.

A competition designed to give high school and college students some cybersecurity skills and showcase potential careers in the U.S. Army and civilian sector will play out on the campus of Wright State University.

“I am super excited,” said Matthew Kijowski, senior computer systems administrator in the College of Engineering and Computer Science. “The focus of this competition is to make more students aware of cybersecurity as a career field and give them a little bit more behind-the-scenes knowledge of what’s actually going on.”

Maj. Jay Pederson, assistant professor of military science, said cybersecurity is a new and growing branch in the Army and there is a big push to attract cyber officers.

“We thought this would be a great opportunity to partner with the Cybersecurity Club and computer science department and put on a type of competition where we let the students know this could be a career for you,” he said.

The club has about 30 primary members majoring in everything from computer science and engineering to business. The club has taken part in collegiate and professional competitions and for the past two years has been the reigning champion in the contest at the annual Day Con Cybersecurity Conference in Dayton.

“The primary objective for club members in competitions is to gain skills outside of formal classroom learning,” said Kijowski, the club’s adviser.

He said cybersecurity competitions typically involve teams that either attack or defend fictional computer networks and complete a series of challenges. They are usually single-day events lasting three to five hours.

The competitors bring their own computer systems, setting up multiple laptops with different tools and cybersecurity installations. Sometimes teams are given access to the environment months before the competition to configure and prepare for an attack and defense.

The Dec. 1 event will be held on campus in the Russ Engineering Building and the adjacent Joshi Research Center. Registration begins at 9 a.m. outside the Appenzeller Visualization Laboratory in Joshi. The event will culminate in an awards ceremony beginning at 4 p.m.

Brian Rigling, interim dean of the College of Engineering and Computer Science, applauded the competition.

“This kind of event lifts the veil and shows the potential excitement and urgency for a career in engineering and computer science to help generate understanding and interest,” he said.

“I think you would have a hard time finding a government agency or a company in the Miami Valley that is not touched by software or information technology or cybersecurity needs in some way,” he said.