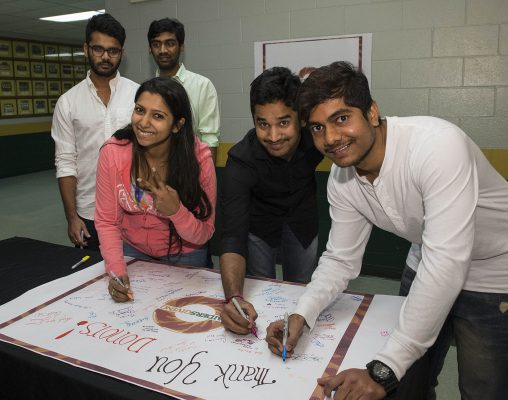 The seventh annual Raidersgiving will be held Thursday, Nov. 22, from noon to 2 p.m. in the Wright State Nutter Center’s McLin Gym. The event is free for Wright State students.

No Raider has eaten alone for six years. This year will be the seventh Raidersgiving during which Wright State students who do not go home for Thanksgiving can celebrate with fellow Raiders.

This year’s celebration will be held Thursday, Nov. 22, from noon to 2 p.m. in the Wright State Nutter Center’s McLin Gym. The event is free for Wright State students.

Since 2012, the university has hosted a Thanksgiving dinner for students, faculty staff and alumni. Only 22 students attended the first Raidersgiving. It has since grown every year, with about 350 people are expected to attend this year’s event.

Raidersgiving is supported by the Wright State Foundation, Chartwells and the Barnes and Noble bookstore at Wright State.

Attendees can enjoy a traditional Thanksgiving meal of turkey, mashed potatoes and gravy and macaroni and cheese, along with halal and vegetarian options. This estimated that approximately 70 pies will be served.

While at Raidersgiving, students can make cards for children who are in the hospital. Wright State Latinos Amigos will also provide piñatas — a Raidersgiving tradition. In addition, participants can play board games donated by the Dunbar Library. Adam Wik, a Wright State graduate who invented the game Galatune, has donated a copy of his game to play. DayCon, a Dayton board gaming community, will provide game masters to run the games.

This said he looks forward to Raidersgiving because it is a chance for students, faculty, staff and alumni to socialize and see each other again.

“It is a homecoming of sorts,” he said. “I received a call back in September from a graduate who lives in Chicago now and will be back for Raidersgiving to help out since we were there for her in the past.”

This said the graduate encompasses Raidersgiving’s motto of “No Raider Eats Alone.”

“We come together as a community to support one another regardless of sex, sexual orientation, race, nationality and religion. If we truly are a university that transforms the lives of the students and communities we serve, then Raidersgiving is an embodiment of that value,” he said. “I enjoy watching the students who were at some of the first Raidersgivings return to help out or renew friendships.”

To support Raidersgiving, you can adopt a Raider by donating to cover the cost of a meal. Learn more >>