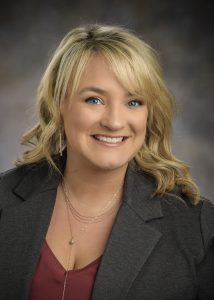 The Remen Institute for the Study of Health and Illness (RISHI) at the Wright State University Boonshoft School of Medicine has named Rianna Lloyd director of the Power of Nursing, effective Nov. 19. Lloyd succeeds Mary Pat Thomas, who joined RISHI in December 2016.

“Mary Pat’s outstanding tenure as Power of Nursing director has been noteworthy for setting a new standard and many achievements under her leadership,” said Evangeline Andarsio, director of RISHI. “We are enormously grateful for Mary Pat’s service and leadership to RISHI.”

Lloyd has extensive clinical experience as a nurse. She holds a bachelor’s degree in education from Miami University and began her career as a math and science teacher, but felt called to become a nurse. She went back to school and earned an associate degree of nursing in 2009. Lloyd soon began working as a cardiothoracic nurse at Kettering Medical Center and as a resource nurse for Ohio’s Hospice. She went on to finish a Master of Science in Nursing, after which she became clinical nurse manager of the same cardiothoracic surgical unit. In May 2018, she completed a Doctorate of Nursing Practice in Nurse Executive Leadership from The Ohio State University.

As a nurse, Lloyd felt her service to patient care was through a compassionate and transformational leadership style where she could engage, recognize and build care teams.

“The Power of Nursing is about embracing personal core values, recognizing a passion and service of caring for others, and creating a sense of resiliency within ourselves. It is recognizing the human connection in each of us as individuals and community,” Lloyd said. “Having served the last decade in such a multitude of various roles in nursing, I come with not only an understanding of current opportunities and challenges, but also with open eyes and recognizing the existing need to provide nursing professionals with the tools and resources to serve in lifelong roles.”

The Power of Nursing is a 15-hour elective course that utilizes discovery model guidelines for nursing students and graduate nurses. The curriculum is also being utilized in community-based health care organizations to train new graduates and experienced nurses.

The course enables the formation of a genuine community of inquiry that encourages an in-depth sharing of experience, beliefs, aspirations and personal truths. Participants and course directors meet on an equal footing and interact in a setting that supports honest reflection and personal discussion on foundational perspectives and values in nursing.

The Power of Nursing is unique and significant because it emphasizes the fundamentals of successful nursing practice, specifically reconnecting with the human elements of deep listening, presence, acceptance, loss, grief, healing, courage and self-care.