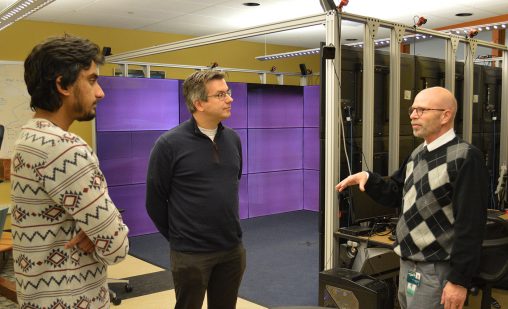 A multidisciplinary team of Wright State University researchers has been awarded funding from the Ohio Department of Medicaid for $469,813 to advance health equity for the Medicaid population by increasing Medicaid provider cultural competency and awareness of implicit bias through training composed of virtual and augmented reality.

Hershberger said that this is an ideal way for health care providers to better understand the challenges Medicaid patients face.

“As the Medicaid population becomes more multicultural, it is vital for health care providers to become more culturally proficient,” he said. “By addressing implicit bias with health care providers, we can reduce health disparities and improve patient care and health outcomes.”

The virtual and augmented reality program will build upon the Life Course game, an interactive training tool for health professionals designed to help players better understand the social determinants of health, the economic and social conditions that affect an individual’s health. The Boonshoft School of Medicine uses the game to teach social determinants of health to medical students, residents and other health professions students.

Sabrina Neeley, Ph.D., associate professor and director of the Population Health Curriculum at the Boonshoft School of Medicine, explained that educating health care providers on the social determinants of health can make a significant difference in the health care outcomes of patients.“Education, income, family situation and employment play a role in the health outcomes of vulnerable populations,” she said. “By playing this Life Course game, health care providers will realize that those born with fewer resources face more challenges throughout life.”

Hershberger and Pei expect the design and development to be completed by the end of March. The program will be rolled out to Medicaid providers beginning in April.

“We hope to reach 200 Medicaid providers in the state of Ohio by June,” Hershberger said. “Our goal is for the Ohio Department of Medicaid to use our virtual and augmented reality immersion program well beyond the grant period that will conclude at the end of June.”

The Medicaid Equity Simulation Project is funded by the Ohio Department of Medicaid and administered by the Ohio Colleges of Medicine Government Resource Center. The views expressed in this news release do not represent the views of the state of Ohio or federal Medicaid programs.