When she was a young girl attending Catholic school, Kris Kropff would take daily piano lessons from a nun at a nearby convent. But when she hit fourth grade, she switched to saxophone.

“I loved Pink Floyd,” she confesses.

However, Kropff has since returned to church music in a big way. The Wright State University alumna is president of music publishing for The Lorenz Corporation, one of the largest publishers of choral music in the land.

Music has always been at the center of Kropff’s life.

She describes herself as the “classic band nerd” when she attended Chaminade-Julienne High School in Dayton, where she played in the orchestra, in musicals and was a drum major.

“By junior year, I was pretty set that music was what I wanted to study,” she said, adding that she wanted to become a band director. 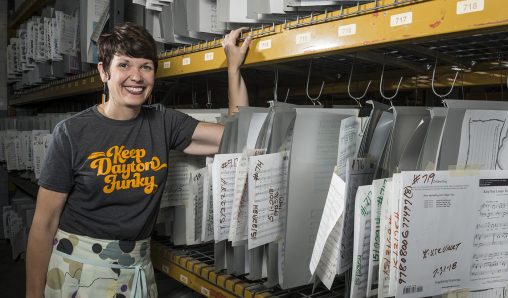 Kris Kropff, who graduated from Wright State with a bachelor’s degree in music and music history and literature, president of music publishing for The Lorenz Corporation, one of the largest publishers of choral music in the country. (Video by Kris Sproles / photos by Erin Pence)

Although she was accepted into the prestigious Eastman School of Music in Rochester, New York, Kropff opted to enroll at Wright State to be near her ailing grandmother.

“Upon reflection, Wright State was one of the best things that ever happened to me,” she said. “At Wright State there was a whole breadth of programs.”

As a student, Kropff performed as part of numerous ensembles, playing clarinet and bass clarinet in Wind Symphony, saxophone in Jazz Band and as a reed player for many of the university’s award-winning theatre productions.

Her clarinet teacher was Randy Paul, the late chair of the School of Music.

“Randy cared enough about students to understand there was more to a person than just how they performed,” said Kropff, who in 2010 was named the School of Music’s Alumni of the Year.

Founded in 1890, Lorenz is a fifth-generation, family-owned music publishing, printing and distribution company based in Dayton. It identifies and collects new choral compositions, prints the sheet music and sells it to churches and schools. Lorenz operates out of a five-story, red brick building it has occupied since the 1940s. The overpowering smell of ink and the hum and clack of the printing press dominate the factory floor, which is also home to a mechanical folder, cutter, coater, stitch liner and enormous spools of paper.

At least four Wright State alumni work at Lorenz, which has about 60 employees in Dayton and 15 in Nashville. It also has a team of 11 editors outside of Dayton who maintain relationships with the composers who write the music that is sold by Lorenz. 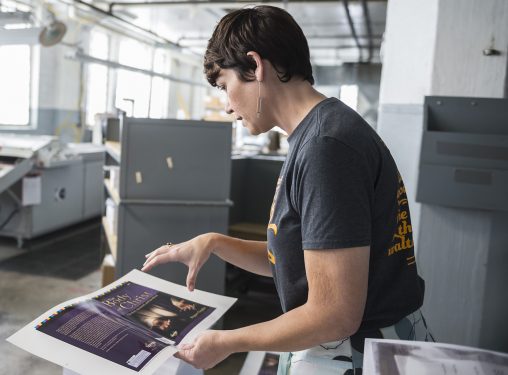 As a student at Wright State, Kris Kropff playing clarinet and bass clarinet in the Wind Symphony, saxophone in Jazz Band and as a reed player for university theatre productions.

Kropff started at the bottom, running the office copy machine. She said she began to learn the business by “asking annoying questions” and challenging the way things were done.

“That’s how it works when you’re 23 and think you know everything,” she said.

Kropff was put in charge of integrating new information technology into the company’s operations and as a result got to learn about most every facet of the business.

“I answered our customer service line and took sales orders, which taught me a lot about who our customers were,” she said.

She once made the mistake of accidentally throwing away an entire drawer of accepted but not yet published manuscripts because she thought she was being efficient. But the misstep didn’t slow her down.

Kropff developed the position of editorial coordinator to help streamline workflows and improve and implement new software applications. In 2006, her editorial role was expanded to include leadership of the Heritage Music Press General Music catalog.

As part of that job, she became founding editor of Activate!, a magazine for school music teachers. The magazine includes sheet music and lessons on how to teach it.

“We’re trying to make sure that even if they (students) don’t grow up to become music majors at Wright State, they’ll appreciate music,” Kropff  said.

“If you go into any church in the U.S. and look hard enough, you will find one of our magazines,” Kropff said.

In 2008 Kropff was named vice president of marketing, taking charge of developing and directing advertising strategies for the company’s more than 500 new music titles released each year. In 2011 she was named president of music publishing.

Lorenz publishes about 180 new choral anthems for churches annually as well as instrumental music for organ, piano and handbell. Under its Heritage Music Press imprint, the company publishes another 100 choral pieces for choirs from elementary through advanced high school along with a dozen or more lesson books for K-6 general music.

“We have composers all over the world with whom we have ongoing publishing relationships or just seek us out,” said Kropff. “One of my favorite things is to find some of those new writers, like our schoolteacher from Portland, Oregon.”

“It’s an uplifting gospel Mass,” said Kropff, who listens to much of the music the company ends up publishing. Kropff, who took an aural-skills class at Wright State, can look at a piece of sheet music and without playing it can “hear” what it sounds like.

As a marketing tool, Lorenz makes recordings of most of the sheet music it wants to sell using professional singers at a studio in Indianapolis. The company also spends about $1 million a year mailing CDs to prospective customers. Some of that money is recouped from churches and schools that buy the music in order to sing chorals over it. 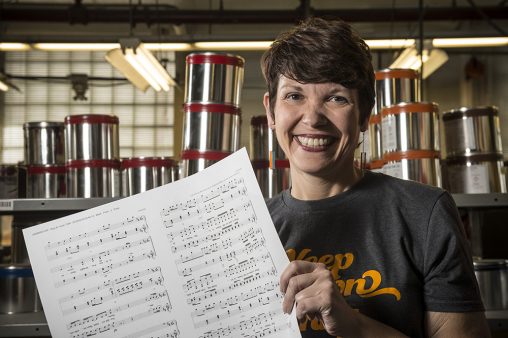 Kris Kropff started at the bottom, running the office copy machine and learning the business by “asking annoying questions” and challenging the way things were done.

“It’s the perfect delivery system at a very affordable price,” she said. “Ultimately, it is about picking that compelling or inspiring song – that piece that will move your choir, that lesson you know is going to lock in that concept for kids.”

When she’s not working or sleeping, Kropff enjoys riding her 1977 Suzuki 650XS motorcycle, is a licensed open-water diver and has “jumped out of a perfectly good plane — twice.”

For someone who was only going to stay at Lorenz for six months, Kropff has had a pretty good ride. And Wright State had something to do with it.

“Think about your college experience as the widening of a path … and taking advantage of those opportunities that I think Wright State is in a unique position to offer,” she said.