Irene Romanowski, a long-time music librarian at Wright State University who established a scholarship for piano students, made a return visit to campus to hear a special piano concert to celebrate her 100th birthday.

Two piano students and one alumna played pieces from Chopin, Schubert and Debussy in Schuster Hall in the Creative Arts Center on Dec. 20 as Romanowski sat on stage looking on. At the concert’s conclusion, Jackson Leung, professor of music, took over the piano and led well-wishers in the singing of “Happy Birthday.”

“We are very happy to celebrate her 100th birthday. It’s really a blessing and honor for us,” said Leung, adding that Chopin is Romanowski’s “favorite composer.”

Romanowski worked in the music library in the Creative Arts Center before it moved to the Dunbar Library. The library was filled with recordings and books about musicians and music history.

“She helped all the students, all the faculty with their research needs,” said Leung. “She greeted everyone with a smile and helpful hands.”

Leung noted that Romanowski was part of the Polish resistance movement against Nazi Germany in occupied Poland during World War II. “It’s really inspiring to me, her recollection of the war and how she survived and how she excelled in her own field,” said Leung.

After she retired at the age of 85, Romanowski continued to be involved with what was then the Department of Music. After the name to the School of Music, she became a donor for the piano division. 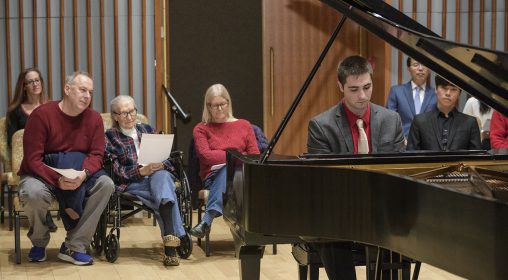 Irene Romanowski, sitting at center, looks on as piano student Jackson Riffle performs during a concert in her honor. (Video by Kris Sproles / photo by Chris Snyder)

Herb Dregalla, who was chair of the music department at the time, said Romanowski approached him about establishing the Irene Romanowski Music Scholarship for piano students. Every year, a piano student who excels academically and in performance receives the scholarship.

Leung said the scholarship is a way to recognize outstanding piano students. “It’s just such an encouragement to me and the students,” he said.

Jackson performed Schubert’s “Sonata in A minor” for Romanowski.