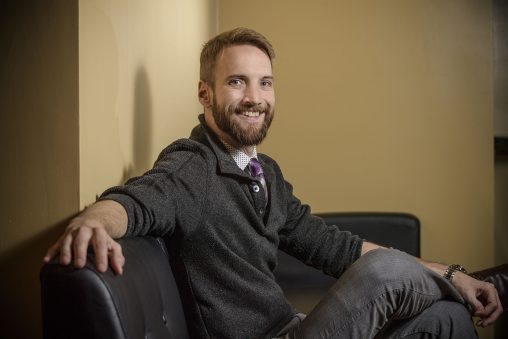 Scott Marshall has parlayed a bachelor’s degree in motion pictures from Wright State into careers in video production, communications for school districts and producing live, scripted matches for WWE at arenas around the country and the world. (Photos by Erin Pence)

He was in a park watching his young daughter on the playground when he got the fateful telephone call. It was a job offer from World Wrestling Entertainment (WWE), the largest wrestling promotion company on the planet.

Wright State University alumnus Scott Marshall flashed back to his days as a boy when he would attend pro wrestling matches and get occasional autographs and high-fives from his heroes. So after checking out a couple of WWE events in Virginia as an observer, he took the job.

“I grew up watching this stuff. Never in my wildest dreams did I think I would be standing there producing one of those shows,” said Marshall, who joined WWE in 2016 as a live-event producer. “I never get over that.”

Marshall has parlayed a bachelor’s degree in motion pictures from Wright State into careers in video production, communications for large school districts and now producing live, scripted matches for WWE at arenas around the country and the world.

“A degree in motion pictures gives you a lot of versatility,” said Marshall. “There are so many avenues out there. You can make a lot of pieces fit.”

Marshall loves the logistics of staging a WWE event, being the puppet master for the lighting, announcers, audio, music, scripts, promotions and fan interaction.

“I like the live atmosphere,” he said. “I like the rapid pace, things changing on a dime. I’ve been told I’m a very calm person, so if stuff gets out of sorts it usually doesn’t bug me or I don’t show that it does.”

Marshall grew up in Cincinnati. He got into movie-making in middle school when he and a neighbor began playing around with a video camera. That led to producing their own shows that were broadcast on public access television.

“That’s kind of where we learned the ropes,” he said. “They would teach you about focus and lighting and audio. We learned there was a lot more to it than just setting it up.”

Marshall and his friend produced talk shows and did some comedy. They even tried to recreate “Cops,” the popular television series.

“We would actually put on life vests and put T-shirts over it and it would serve as bulletproof vests,” said Marshall. “The joke was we would always use our parents’ cars as our police cars, but they would be sitting in the garage and would never move.”

The experience at the station gave Marshall a love for storytelling — writing, designing, editing and producing something that can shape the emotions of the viewers.

After graduating from Anderson High School in 1997, Marshall was all set to study filmmaking at the University of Pittsburgh when he read an article in the Cincinnati Enquirer about Julia Reichert, an award-winning filmmaker who taught film production at Wright State for many years.

So after a visit to Wright State, Marshall switched gears, applied to Wright State and was accepted into the Motion Pictures Program in the College of Liberal Arts. He found it very challenging, with a lot of in-depth theory classes on directors, genre and film history.

Marshall learned a lot and even impressed his roommates at the University of Southern California, where he took a summer course in video production his sophomore year.

“Wright State’s Motion Pictures Program definitely prepared me to be well-rounded in the field of production,” he said. “But the theory part of my degree from Wright State I think is the most important to me.”

During his junior year at Wright State, Marshall and a classmate wrote, edited, produced and financed “Jebediah’s Silver Lining,” a film about a recovering addict just released from prison who meets a boy with autism.

While at Wright State, Marshall also worked as a DJ, production director and then general manager of WWSU radio, which gave him a love of music and of managing people. He was general manager during the terrorist attacks of 9/11.

While at Wright State, Marshall also started doing camerawork, graphics and replay for the Dayton Dragons and still does some work for the minor league baseball team. He also worked University of Dayton basketball games.

After graduating in 2002 with a bachelor’s degree in motion picture theory and criticism, he took a job with a video production company in Cincinnati. He worked his way up from a third-shift tape-room operator to assistant editor to editor and producer.

In 2009, he landed a job with Dayton Public Schools teaching and producing storytelling videos. Three years later, he took a similar job with Springfield City Schools. 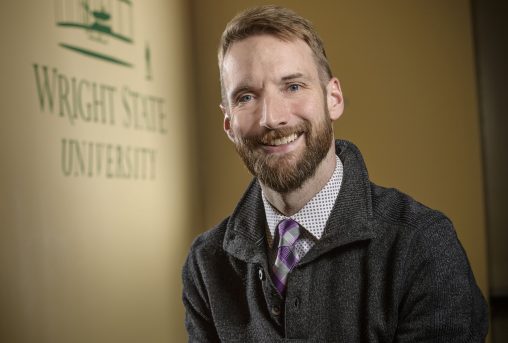 Scott Marshall has produced World Wrestling Entertainment shows around the United States and in Colombia, Panama and the Czech Republic.

Then came the job offer from WWE, which had Marshall dancing for joy like a 9-year-old kid.

The WWE live events that Marshall produces are a carryover from the “territory days,” when the wrestlers would travel from city to city to perform for fans in local arenas. There are usually three WWE live events every weekend, all year long. They typically include eight or nine wrestling matches over three hours and draw between 6,000 and 15,000 fans. Unlike the live televised WWE shows, “Monday Night Raw” and “Smackdown,” the live event shows are not televised.

“They want to make it look like a TV show, but it’s not being broadcast,” said Marshall, adding that the event mimics a televised show to create a great environment and experience for the fans.

As producer of a live event who works next to the ring near the audience, Marshall must be fast on his feet.

A key skill is knowing when and how to keep the show moving along with fan-interaction moments.

“You have to know in a match how things are going with the crowd being involved,” he said. “Are they up? Are they down? If they’re down, how do you get them up?”

Marshall usually arrives at the venue the day of the live event and puts in a 12- to 14-hour work day. On one weekend in January, he traveled to arenas in South Dakota, Nebraska and Kansas over three days. He has produced shows around the country and in Colombia, Panama and the Czech Republic.

Marshall works for WWE one or two weekends a month and during the week works as communications coordinator for Springboro Public Schools. He says the WWE experience, the crew and the team effort for the fans give him a lot of satisfaction.

“It’s not just lights and cameras and music, but it’s those memories and opportunities that people can have an interaction with,” he said.