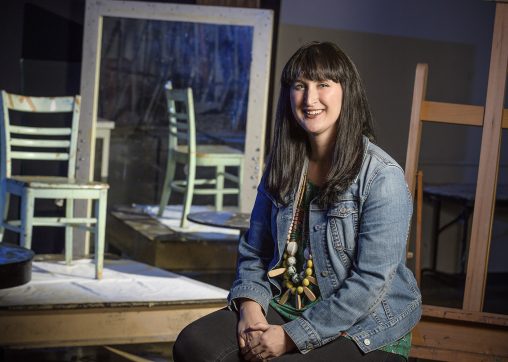 Wright State fine arts grad Erika b Hess interviews artists, curators, collectors and gallerists on her popular “I Like Your Work” podcast. (Photos by Erin Pence)

To help showcase the work of fellow artists and build connections in the art community, nationally exhibited painter Erika b Hess began doing her own podcasts.

What surprised the Wright State University alumna was how popular her podcast interviews of artists, curators, collectors and gallerists quickly became.

“It’s just taken off,” said Hess, who has released more than 20 episodes since launching her “I Like Your Work” podcast in September. “The great thing about it is it serves as a platform for artists, so it gets their work out there. At the same time I get to build my own community even more.”

Hess’ work has been exhibited nationwide, including in New York City, Los Angeles and Boston. Her artwork is part of collections in Florida, Toronto, Boston, Columbus and Oakland. Last year she had three solo exhibitions, one in Philadelphia and two in Boston. She recently opened an exhibition at Anderson University in Indiana.

Hess makes oil paintings that deal with basic human narratives — such as birth and death — through a female lens. She uses vibrant colors that attract the eye and are considered feminine such as hot pinks and bright teals.

Hess’ recent paintings have been driven by her becoming a mother (she has two young children) and exploring her temporal existence.

Hess grew up in New Concord, Ohio. She became interested in art at age 4 or 5, staging drawing contests with her cousin, who is also a painter. At John Glenn High School, Hess took art classes and was heavily involved in the arts.

After graduating in 2000, she enrolled at Otterbein College, where she majored in public relations and minored in art, but spent most of her time in her art classes.

During a visit to Wright State to see some friends, Hess met with an art history teacher and decided to transfer. She remembers taking an introductory drawing class and realizing she still had a lot to learn. But a study-abroad trip to Florence, Italy, cemented her decision to make painting her life. 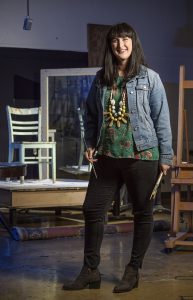 Hess said she had an “amazing experience” at Wright State. She said her painting and drawing classes prepared her well for graduate school, where she more than held her own with students from Ivy League schools.

After graduating with a bachelor’s degree in painting from Wright State in 2006, Hess and friend and fellow artist Rebecca Sargent opened an art studio at Dayton’s Front Street Studio Gallery, a honeycomb of art studios, galleries and small businesses.

The following year Hess enrolled at Boston University, where she earned her master’s degree in painting in 2009. After moving to Brooklyn to work as an artist assistant, she was awarded a grant to create an illustrated comic book that shows people how to do container gardening.

She learned about container gardening while working on a farm in Asheville, North Carolina, through the Worldwide Organization for Organic Farming. Her book was distributed in Boston, Brooklyn and Columbus.

Hess next landed a job at the University of Michigan, where she worked for three years before returning to Boston. It was there where she co-founded Musa Collective, a gallery designed to create a dialogue between artists through community support, exhibition and curatorial opportunities.

Hess recently moved from Boston to Columbus, where she had a studio built at her house. She started her “I Like Your Work” podcast in Boston prior to the move, in part to make connections with the art community in Ohio.

“Whenever you move to a new space it can be hard to break in to the art world, the art community there,” she said. “I thought the podcasts would be a really wonderful thing to offer someone — the gallerists, the artists — that I want to meet with.”

Hess often produces the podcasts from the art studios of her interview subjects. She sets up a microphone and uses a software program on her laptop.

“I love doing those interviews because I get to be in their studio space and see what they’re working on,” she said.

Hess’ first episode, and highest-rated one, was with Sargent.

Hess has since interviewed idols of hers who live in New York City, people she “never in a million years” thought she would be able to meet.

Hess said that during her podcast listeners will post on Facebook and Instagram while they are painting. The podcast episodes coupled with social media have artists from around the world sharing their experiences. Sometimes they make connections by meeting face to face with each other.

“One of the biggest things I’m interested in,” said Hess, “is building community.”