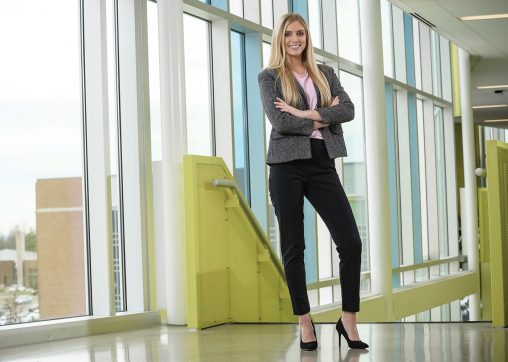 After she graduates from Wright State, Olivia Kilby hopes to go to law school and practice as a defamation attorney.

Olivia Kilby ’19 has always wanted to help people. When she was younger, she assumed that meant she had to go into a medical field to maybe become a doctor or nurse, even though that didn’t really interest her. After evaluating her strengths and weaknesses, she realized she could help people in another way — as a lawyer.

“My interest in the legal system has always been there,” she said. “It just took me time to reflect and know what career field I belong in.”

Kilby is a senior majoring in political science and liberal studies, with a minor in legal studies. She said she decided to go into political science because it was a popular degree option for students planning to go into law. After she graduates from Wright State, she aspires to go to law school and practice as a defamation attorney.

Growing up, Kilby was nearly never alone. One of nine siblings, there was always someone for her to hang out with or bother her. She said she enjoyed living with all her siblings.

“My siblings are my best friends,” she said. “We push each other every day to excel in life. Having so many siblings gives me the opportunity to be a mentor and lead by example in all aspects of life.”

During third grade, Kilby was diagnosed with six different learning disabilities. She used tutors all through high school, although she continued to struggle. Additionally, she said at a young age, someone told her working in a medical field was “impossible.”

“The lawyer in me does not like to be told what I can and can’t do, and that is what drove me to overcome ‘impossible’ odds,” she said.

While at Wright State, Kilby said she has taken full advantage of the resources in the Office of Disability Services and is overwhelmingly appreciative of its assistance to help all students succeed.

“Being part of the disability services program has never dulled my passion for law,” she said. “However, it took me a long time to get to the point where I ‘learned how to learn’ and discovered that I can and will do great things.”

At Wright State, she has been on the Dean’s List every semester and will graduate in May with two degrees she earned in just three years. Additionally, in 2018 she was awarded the Thompson Hine Pre-Law Scholarship from Thompson Hine LLP, a law firm in the Dayton area.

“I appreciate the opportunity and how it will help me achieve my future goals in the legal profession,” she said. “[And] I appreciate so greatly the fact that this scholarship has encouraged my legal studies, specifically because I am enrolled with disability services.”

In the past, Kilby said she had used her learning disability as an excuse to underperform in school, but as she continued in her high school and college career, she learned this was not true.

“Having a disability isn’t an excuse to do poorly in school. If anything, it is a reason to try even harder than those around you and achieve your goals despite the odds stacked against you,” she said.