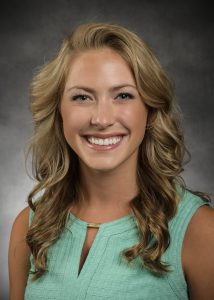 Rachael Herriman, a fourth-year student at the Boonshoft School of Medicine.

Rachael Herriman, a fourth-year student at the Wright State University Boonshoft School of Medicine, has won the Mahoning Valley Medical Society Foundation scholarship. The $5,000 award is in recognition of Herriman’s determination and excellence in the pursuit of medical education.

Herriman, who grew up in northeast Ohio’s Trumbull County, will use the award to support her studies at the Boonshoft School of Medicine, where she has nurtured a love for pediatrics. Her interest in the area of primary care began when she was an undergraduate student at the University of Miami completing an internship and service program in Chicago.

She took advantage of opportunities on the city’s south side to learn about developmental pediatrics and mentor young children. Those early experiences helped to solidify her desire to work with children one day. Her medical school clerkships also have taught her a lot about the impact she can make in pediatrics.

“It is rewarding to see children who may have a chronic health condition or an acute illness such as bronchitis. They’re initially in really bad shape, but you get to see them rebound,” Herriman said. “The next day, they’re jumping on a bed or drawing in a coloring book, and that’s rewarding for me. I think those little things are what make me want to go into pediatrics.”

The draw toward pediatrics has only intensified through medical volunteer trips she has taken to Peru that familiarized her with infectious diseases, as well as through research she has helped to complete as a medical student. Working with Jordan Stefko, a fourth-year medical student from Canfield, Ohio, Herriman has completed research on the relationships between the mental health of parents and the sleep patterns of their children.

Guided by John Pascoe, M.D., professor of pediatrics at the Boonshoft School of Medicine, Stefko and Herriman presented their findings at the 2018 Pediatric Academic Societies (PAS) meeting in Toronto. This year, they will present two additional posters at the PAS meeting in Baltimore.

The Mahoning Valley Medical Society Foundation scholarship helps to ease Herriman’s burden of paying for her medical school education. And winning the scholarship, awarded by members of her childhood community, makes it even more special.

“A lot of the physicians in that area pretty much shaped my interest and helped guide me to medical school. It was kind of coming back around,” Herriman said. “Getting the scholarship from them was significant because I appreciate the help financially and the honor coming from people who were more or less mentors and led me to medical school in the first place.”

After completing medical school, Herriman is considering various options for residency training. She may work at a university near where she grew up. She hopes to remain in the Midwest for residency but will apply to various programs. It’s clear, however, that she is leaning strongly toward a career in pediatrics.

“I’m hoping to specialize. I’m not quite sure in what yet,” Herriman said. “I’ve been considering child neurology as its own residency, but I’m also interested in infectious diseases.”