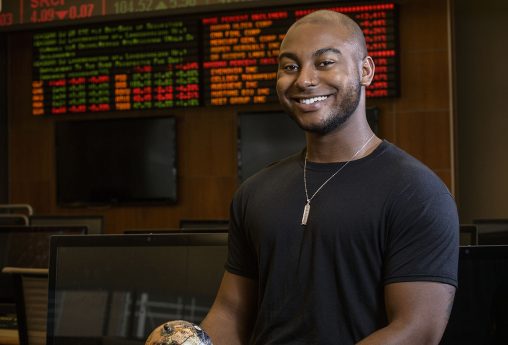 Wright State senior Kareem Garrett, who majors in human resources management, tries to be the “best I can be in the moment.”

Kareem Garrett, a senior human resources management major, has found great success at Wright State University. He has learned a multitude of life lessons from his professors and has taken strides to apply everything he’s learned to both his workplace and his home.

Before Garrett majored in human resources and management, he took biological sciences and nursing prerequisite classes. He was drawn to pursuing a career in business after working with Wright State in several areas, including tutoring, study coaching and strategic planning for the Academic Success Centers, as well as studying abroad in Mexico.

“Business is something I saw myself excelling at and growing professionally,” he said. “I’m able to take what I learn in school home and practice it in real life.”

Throughout Garrett’s time at Wright State, his professors in the Raj Soin College of Business have gone above and beyond teaching not only class material but also life skills, including learning about available opportunities for work, goal-setting and motivating teams.

Garrett is an intern at Lexis Nexis, where he works in human resources supporting about 2,000 employees as needed. His job is to ensure employees are invigorated and engaged by the work they do.

“I try to make a culture where people feel appreciated and important so they value the work they do,” he said. “That’s what I learned in school, how to get people excited and how to make people inclined to be their best self.”

Garrett said one of his driving principles is that of serving others. In the past, he has been a server and has studied nursing, both of which revolve around serving others. His work in human resources also focuses on helping others.

One of the ways Garrett uses his business expertise is social media. He is an influencer on Instagram with several hundred followers. He also collaborated with a friend who works for the City of Dayton on a social media campaign encouraging people to vote in the most recent election.

After graduation on May 4, Garrett intends to go to graduate school to study management. While he is keeping his options open, his career goal is clear.

“I would like to work in an organization where I can make a positive impact on the employees,” he said. “You never know who you’ll meet tomorrow, you never know what opportunities will arise tomorrow. I try to be the best I can be in the moment.”