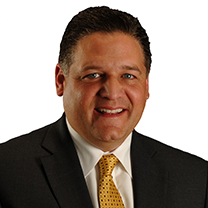 Wright State University has named the next chairman of its board of trustees.

Fitzpatrick will take over for Douglas Fecher, the current chair of the board, at the start of the next fiscal year, July 1, 2019. Board chairs serve for two years.

Fitzpatrick is responsible for U.S. research business at LexisNexis, delivering information resources to legal professionals in law firms, corporate and government. He’s also the site leader for the Dayton facility, which stands as the largest LexisNexis location in the nation.

This announcement follows the recent news of Wright State officially avoiding the state’s fiscal watch, based on U.S. Senate Bill 6’s criteria. The law is designed to increase financial accountability of state colleges and universities by using a set of measures which monitors the fiscal health of campuses, according to The Ohio Department of Higher Education.

Wright State was projecting a $10 million revenue loss and a 32.4 percent enrollment decline for the 2019 fiscal year, according to Dayton Business Journal reporting in June. Revenue from tuition and fees is expected to drop by $8.2 million this year, from $173 million to $164.8 million, and its expected to lose about $1.4 million in appropriations from the state of Ohio next year.