When he’s standing on base, the cheers of the fans and the chatter of the players fade away. Wright State University baseball player J.D. Orr hears none of it.

“I kind of go into a zone. It feels like I’m on the field by myself,” he said.

Then Orr proceeds to make his own noise. Legs churning and arms pumping, he bullets across the infield with liquid motion and dives head first into the next base, kicking up a fountain of tiny black rubber pellets from the field turf that poppy-seed the top of the bag.

Orr has become a bandit of base-stealing, breaking both the Wright State season and career records for stolen bases.

Head coach Alex Sogard said Orr is one of the best base-stealers in the country. “I think J.D. is one of the most exciting players to watch in college baseball,” said Sogard.

“He’s such a powerful runner. It seems like every time he gets on base it has positively affected our team.”

“You’re talking about someone with elite, elite tools,” added assistant coach Matt Talarico, who has helped the senior outfielder develop and refine his base-stealing skills over the years. “…If a pro team doesn’t take a shot on him, I think they’re foolish because I think he’s as good as it gets.” 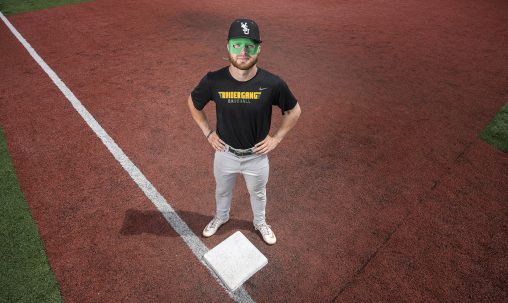 Talarico said Orr has excelled in base-stealing this year in spite of having a bullseye on his back.

“Everybody knows who he is, so they’re just not going to let him steal. …They’re going to try to stop him,” said Talarico. “Does he have an answer to it? That’s where the chess match starts. That’s what I get excited about.”

Orr grew up in Mount Vernon, Ohio. His father works for UPS and his mother is a professor at The Ohio State University teaching information technology.

Orr started playing organized baseball when he was 5 years old.

“I think the thing I enjoy the most is it is such a challenging sport,” he said. “You are never going to be perfect in baseball. You never have it completely figured out; and the aspect that every day I have to come in and do something to make myself better, try to be more successful.”

Orr also began a love affair with hunting when he was a boy and does it to this day, tracking down deer and turkeys.

“I think it’s just the fact that I get to be out in the woods and be by myself,” he said. “I’m kind of a quiet, independent person so being out there and just hanging out and relaxing by myself is something I’ve always loved to do.”

After graduating from Mount Vernon High School in 2015, Orr decided to play baseball at Wright State and pursue a bachelor’s degree in organizational leadership.

“It was close-knit, like a family feeling. There were other schools, but I didn’t have that same feeling,” he said. “And I wanted to go to a place that I knew I was going to enjoy my time and I felt was the best fit.”

Orr said he has always been blessed with speed, but that’s not the only reason he has been successful. He said it took a lot of practice and help from Talarico. Talarico said Orr wasn’t always so confident. He had to be assured that it was OK to get thrown out once in awhile, to make a mistake.

“The goal was to help build that confidence,” Talarico said. “Once he was confident, I just got out of the way.”

Orr said the most meaningful base he ever stole came in an NCAA regional tournament game his freshman year against Ohio State.

“That was when it really clicked for me. It’s when I figured out how to become a really good base stealer,” he said. “I felt that from that point on I had it in my mind I could do this for the rest of my time in baseball.”

Sogard said Orr has improved as a base-stealer each year he’s been with the Raiders.

“When he got here he had the speed, but he probably didn’t have the technique as much,” Sogard said. “You’ve seen it come together through the years of work, day in and day out. And it’s a lot of fun to watch.”

Talarico said Orr has been timed at 3.3 seconds to steal second in a game, a Major League speed. Pro scouts have given Orr a score of 80 out of 80 in his speed from home to first base. 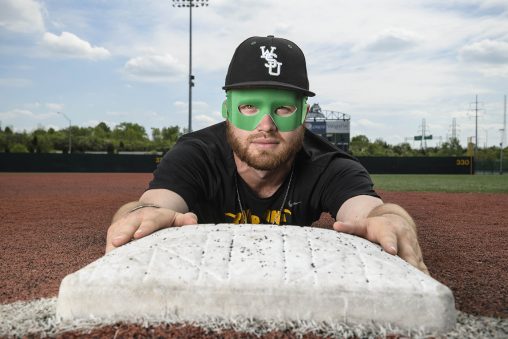 J.D. Orr hopes to play professional baseball after graduating with a bachelor’s degree in organizational leadership.

Orr said his biggest secret to being a good base stealer is just acting on his instincts.

“You have to be able to figure out the pitcher’s tendencies, what they’re going to do,” he said. “And you take advantage of what they struggle with.”

Talarico said the habits of the opposing pitcher and catcher are scrutinized from the time they start warming up before a game to find habits that can be exploited by base runners.

“We believe it puts pressure on the pitcher. He now has to control the guy at first and make a good pitch,” he said.

“He has so much impact on a game, whether he’s stealing a base or putting tension on a pitcher so that they’re worried about going a little quicker to the plate,” he said.

Injuries can be a hazard in base-stealing. Orr broke his thumb stealing a base his sophomore year.

“And just the wear and tear,” he said. “You’re laying on the ground hard repetitively, you get sore.”

Orr is scheduled to graduate with his bachelor’s degree at the end of the summer term. After that, he hopes to give professional baseball a shot. He says breaking the Wright State stolen-base records has been rewarding because he was not always great at base-stealing.

“The work that I’ve put in knowing that it’s paid off is a really good feeling,” he said.