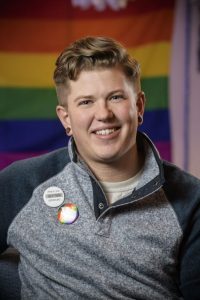 Petey Peterson, director of LGBTQA affairs at Wright State University, was awarded the Julie B. Elkins Outstanding Service Award by the Coalition for Sexuality and Gender Identities (CSGI). The award honors significant contributions to CSGI through their efforts for LGBT awareness in ACPA-College Student Educators International.

“Serving on the coalition for six years, I have found colleagues who have become family and friends, and they have been my core support system throughout my career,” said Peterson “You don’t do this work in a sustainable way without their support.”

Peterson, who uses they, them and their pronouns, received the service award at ACPA’s annual convention in Boston in March.

As CSGI’s equity officer, Peterson has advocated for all-gender restrooms at the national convention and has worked to incorporate people’s pronouns on conference name badges. In addition, CSGI strives to continually center queer and trans people of color in the work of the coalition and intentionally have implemented the ACPA’s Strategic Imperative for Racial Justice and Decolonization.

“To be honored by my peers in this way is really meaningful and feels extra special,” they said.

CSGI is one of the entity groups within ACPA, one of the premier associations for higher education professionals. It strives to increase awareness, eliminate oppression and provide support for the lesbian, gay, bisexual and transgender community in higher education, for faculty, students and staff.

The coalition also improves professional competencies related to topics such as campus climate, equity, identity development, research and scholarship, and program development for the LGBTQ community.

At Wright State, Peterson received the 2018 President’s Award for Excellence in Human Relations in recognition of efforts to implement LGBTQ-friendly policies and programs that encourage inclusivity and openness in the campus community.

They came to Wright State in 2015 as the first director of the Office of LGBTQA Affairs, changing the LGBTQA resource room in the Student Union to a Community Engagement Room. The office provides education, advocacy and community building to create a more inclusive university and greater Dayton community.

Before coming to Wright State, Peterson served as program coordinator in the LGBTQI life office at Vanderbilt University in Nashville. They attended Iowa State University, earning a bachelor’s degree in communication studies and child/adult family services and a master’s degree in higher education student affairs.