Boonshoft School of Medicine holds graduation ceremony on May 28 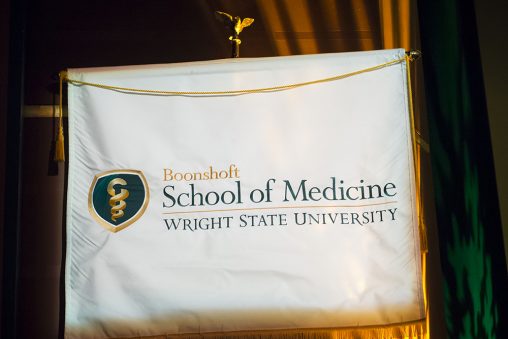 After four or more years of intense study and specialized training, 110 medical students in the Wright State University Boonshoft School of Medicine class of 2019 received their M.D. degrees during the school’s graduation ceremony on Tuesday, May 28, at the Schuster Center in downtown Dayton.

In July, the graduates will begin prestigious residencies and receive advanced training in the medical specialties of their choice. The new physicians will enter outstanding residency training programs in Dayton, throughout Ohio and nationwide, including the Boonshoft School of Medicine, Case Western/University Hospitals Cleveland Medical Center, Emory University, University of Chicago Medical Center, and Wake Forest University (see medicine.wright.edu/match).

More than 44 percent of the Wright State graduates will remain in Ohio during residency, and 14 percent will remain in Dayton. More than a third (45.5 percent) will enter a primary care field (family medicine, internal medicine or pediatrics).

Kennon Miller, M.D., ’07, assistant professor of pathology and internal medicine, delivered the commencement address. Miller is highly involved with teaching in the first two years of the medical school curriculum, particularly immunology, microbiology, and pathology. The class of 2019 was the first class he had the privilege of teaching at Wright State.

Miller completed his undergraduate studies in electrical engineering at the University of Cincinnati. During his time as an engineer, he worked for the Tactical Electronic Warfare Division of the Naval Research Laboratory and in the Circuit Implementation Group of Compaq Computer Corporation.

After exposure to biomedical engineering, Miller decided to pursue a career in medicine and entered Wright State University Boonshoft School of Medicine in 2003. After graduation, he completed a combined anatomic and clinical pathology residency training at the Cleveland Clinic, where he served as a chief resident. He remained at the Cleveland Clinic for fellowship training in medical microbiology and infectious disease pathology. After graduation, he worked as a surgical pathologist in Columbus before returning to Wright State.

Each year, the graduating class presents an Appreciation Award to recognize an individual or organization that has made a significant contribution to the Boonshoft School of Medicine. The class of 2019 honored Robert Gill, M.D., who helped launch the medical school’s rural health initiative.

After deciding to retire from private family practice, he saw a great need to ensure continued care for his former patients. At the same time, Gill realized that the rural region around the Wright State University–Lake Campus also desperately needed more primary care doctors. He began exploring opportunities to collaborate with leaders at the medical school to see if a rural health initiative was possible. In just one year, the Boonshoft School of Medicine’s rural health efforts were underway. It has grown robustly since then, with nearly 20 medical students completing 32 rural clerkships in the 2017–2018 academic year.

Margaret M. Dunn, M.D., dean of the medical school, presented the Dean’s Award to graduating medical student Erica Seabold for demonstrating a commitment to academic excellence, embodying empathy and compassion toward others, exemplifying personal integrity and professionalism and earning the respect and trust of classmates and faculty.

The Teaching Excellence Award was presented to Kennon Miller, M.D., ’07, assistant professor of pathology and internal medicine, who was selected by the class of 2019 as the faculty member displaying outstanding professional skill and pride in discharging his instructional duties.

The Leonard Tow Humanism in Medicine Award was presented by The Arnold P. Gold Foundation to graduate Justin Chu and to faculty member Bethany Harper, M.D., assistant professor and director of medical student education in the Department of Psychiatry, for consistently demonstrating compassion and empathy in the delivery of care to patients.

The Glenn C. Hamilton, M.D., Excellence in Emergency Medicine Award was given to Kirstin Acus, recognizing interest and accomplishment in emergency medicine.

The Society for Academic Emergency Medicine Award was given to Tyrel Fisher, the graduate who has demonstrated outstanding proficiency in emergency medicine.

The Larry Lawhorne Award for Excellence in Geriatric Medicine, sponsored by the Ohio Department of Aging, was given to Tiffany Corbean and Daniel Keltner, for excellence in the study of geriatrics.

The Homer Cassel, M.D., Award, was presented by the Dayton Society of Internal Medicine, in honor of the late Dr. Homer D. Cassel, to David Cha for outstanding scholarship and commitment to the specialty of internal medicine.

The Department of Pediatrics Award was given to Jennifer Barbadora, who is committed to a career in pediatrics and has shown outstanding performance in pediatrics during the clinical years.

The Department of Psychiatry Outstanding Senior Student Award was presented to Kimberly Senko.

The Dan W. Elliott, M.D., Award was presented to Christopher McMellen, who is committed to a career in surgery and has shown outstanding performance in surgery during the clinical years.

The Walbroehl Award for Family Medicine was given to Sara Tisherman for excellence in family medicine.

The Reach Out of Montgomery County Student Volunteer Appreciation Award was presented to Alexandra Meier.

The Global Service Award was given to Erica Seabold, who has a history of volunteering and rotating in a medically underserved area internationally.

The 2019 Excellence in Public Health Award was given to Stephanie Welsh.

The John Worthman, M.D., Award was presented to Erika Allison for entering into the Wright State University Family Medicine Residency.