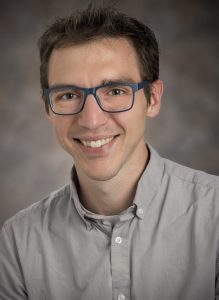 Wright State University will strike up a relationship with Iceland thanks to Derek Doran, an associate professor of computer science in the College of Engineering and Computer Science.

Doran is the recipient of a Fulbright fellowship that will enable him to teach data science and cybersecurity next January to June at Reykjavík University, the largest private university in Iceland. He will also work with Reykjavík faculty and staff to make plans to create a cybersecurity research center of excellence.

The Fulbright is one of the most prestigious and competitive fellowship programs for academic faculty across the world. The goal of the program, which is administered by the U.S. Department of State, is to improve intercultural relations between Americans and other countries through the exchange of people, knowledge and skills.

Doran said the Fulbright opportunity in Iceland matched his background and the strengths of Wright State’s Department of Computer Science and Engineering.

“We have our own cybersecurity program we’ve been developing in the last few years. It’s very successful,” he said. “And I have experience in teaching and doing cybersecurity-related research and classes.”

Doran plans to make some connections between his department and Reykjavik’s school of computer science. And he hopes to help establish student exchanges between the two universities.

A Nordic island country in the North Atlantic, Iceland has a population of more than 350,000, with two-thirds of the populace residing in the capital of Reykjavik. The country is defined by its dramatic landscape with volcanoes, geysers, hot springs and lava fields.

“Some faculty are co-appointees from other universities in Europe, and they have a large student body population from there,” he said. “What they desire is some expertise in cybersecurity and data science.”

Doran certainly has that. He teaches courses in Discrete Mathematics, Network Science and Software Engineering. His research lab conducts applied research on the measurement, characterization and evaluation of content on Tor, a dark web network that is difficult to access and index. The lab also studies ways to generate 3D models using deep learning, a branch of artificial intelligence based on the idea that systems can learn from data and make decisions with minimal human intervention, and on exploring the computational aspects of exploiting the geometry or topology of data by machine learning algorithms.

Doran grew up and completed all of his education in Connecticut. He began playing the drums when he was 8 years old and still does, occasionally jamming with other computer science and engineering faculty at Wright State. He is a frequent traveler and is forever impressed by the movie “Blade Runner,” to which a poster on his office wall attests.

Doran only became interested in computer science after taking a college class in designing computer software required by engineering majors.

“Then I started taking courses on the mathematics of computer science and on algorithms and complexity theory,” he said. Such classes hooked his interest in the science of computing. “It’s awesome stuff.”

Doran earned his bachelor’s degree in computer science and his M.S. and Ph.D. in computer science and engineering, all from the University of Connecticut. During graduate school, he became a National Science Foundation East Asia and Pacific Summer Institutes Fellow that took him to Taiwan during the summer of 2010. He also had summer work experiences at historical Bell Labs in New Jersey.

Doran’s first few years of graduate school focused on building analytical models to forecast performance aspects of computer systems and the probability they would fail. While Doran’s Ph.D. dissertation was related to this topic, the later years of his graduate studies had his attention turned to big data and machine learning over information networks.

“There has since been a shift away from needing analytic models given rapid advances in our ability to probe and collect data from complex systems at a massive scale. Empirical analysis, data science methods and machine learning algorithms are of greater relevance, which is what I research now,” he said. “That explains my evolution, my academic trajectory.”

Doran joined the faculty at Wright State in 2014, won the President’s Award for Faculty Excellence: Early Career Award in 2017 and received early promotion and tenure in 2018. He was attracted to the Department of Computer Science by its culture, his perceived research synergies with its faculty and for its balanced approach between teaching and research. He was further attracted to the area because of its proximity to the Air Force Research Laboratory at Wright-Patterson Air Force Base.

“We have one of the foremost research labs in the country right across the street,” he said. “They are constantly in demand for knowledge and talent, so there are a lot of research opportunities with them that I’ve been able to take advantage of. And to say they work on important problems is a true understatement.”

Doran will carry out the Fulbright under a leave of absence from Wright State that he will take beginning in the fall.

“The Fulbright is one of those major international fellowships I’ve always wanted to try for,” he said. “My foremost goal is to make sure I make a positive impact at Reykjavik University and to embrace all of the full Fulbright experience.”