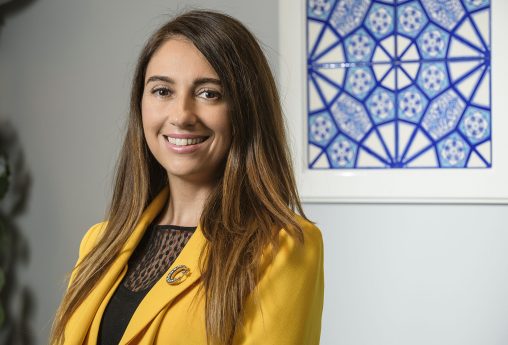 Gokce Ergun, associate professor in the School of Professional Psychology, received funding from the Ohio Department of Mental Health and Addiction Services to raise awareness about Fetal Alcohol Spectrum Disorders and conduct training in prevention, diagnosis and referral for treatment. (Photos by Erin Pence)

“Fetal Alcohol Spectrum is the No. 1 preventable cause of intellectual disability,” said Ergun.

Fetal Alcohol Spectrum Disorders are the result of women ingesting alcohol during their pregnancies. The alcohol passes through the woman’s placenta but is not metabolized and stays in the amniotic fluid without being excreted.

The alcohol interferes with the development of the fetus’ brain and can cause intellectual deficits and physical abnormalities such as birth defects, facial malformations, growth retardation and shrinkage of the brain.

“There is no safe level of alcohol during pregnancy,” said Ergun. “Disseminating this information by people who are knowledgeable is really, really crucial.”

Part of Ergun’s campaign focuses on prevention by doing a series of presentations at clinics, jails and other places where there are women of child-bearing age. She recently conducted a series of workshops and trainings for inmates at the Ohio Reformatory for Women (ORW) in Marysville. The women were told about the harmful effects of ingesting alcohol during pregnancy and the impact on the unborn baby. She also trained the staff at ORW about how to work with individuals with FASD within the prison setting.

Ergun’s campaign also includes educating parents, clinicians, social workers, teachers and others about how to identify the disorders and where to refer the affected children for treatment. She has made presentations in school and legal settings as well as adoption agencies.

Ergun and one of her students are developing a “screener,” or a list of questions for physicians and other primary caregivers to help screen children for FASD and determine where they should be referred for diagnosis and treatment.

“The biggest problem is that these kids don’t get diagnosed early,” she said. “It’s a really complicated disorder. Not a lot of people have expertise in this and it gets missed.”

Recent studies suggest that the prognosis is better if a child with FASD is diagnosed before age 6, is in a stable home and is connected with the right intervention services.

Ergun said about 70 percent of children with the disorders are separated from their birth parents and are either in foster homes or adoption care.

“Their decision-making process is compromised,” she said. “They have a lot of neurocognitive impairments.”

Some end up in the justice system. Ergun has worked with judges, public defenders and probation officers to teach them about FASD and how to interact with the children to keep them from re-offending.

“You might have a child who has an average IQ but is having a lot of behavioral dysregulation,” she said. “This is a time when these kids would need a lot of advocacy.” 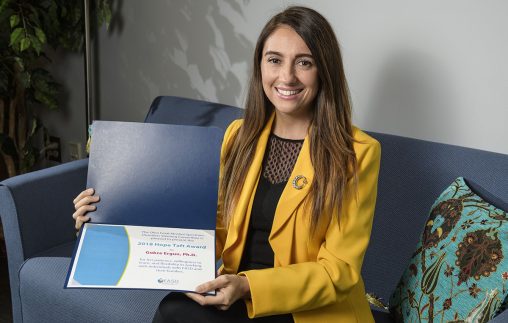 Ergun is a member of the Ohio Fetal Alcohol Spectrum Disorder Steering Committee. Its mission is to work to prevent FASD and coordinate services for diagnosis, treatment, consultation and advocacy.

Ergun is also working on forming a statewide team of physicians, psychologists and others interested in FASD who can help each other with cases and share information.

Ergun said she became interested in psychology because she was intrigued by the diagnostic aspect of it.

“To me that is finding the pieces of the puzzle, putting them all together, being like an investigator,” she said. “You’re not just delving into all of the biological parts, you are also dealing with social contexts, all the diversity variables of an individual. You’re putting all of those pieces together and trying to understand the person.”

Ergun came to the United States to pursue her Ph.D. in school psychology at Central Michigan University. She became interested in Fetal Alcohol Spectrum Disorders during her predoctoral internship at the University of Minnesota Medical School and its Children’s Hospital.

Ergun, who joined the Wright State faculty in 2012, teaches Cognitive Assessment, Child Assessment and Clinical Neuropsychology. She specializes in Fetal Alcohol Spectrum Disorders as well as neurodevelopmental disorders such as autism, ADHD, learning disabilities and any type of prenatal exposure. She also supervises students at Wright State’s Ellis Human Development Institute in assessment and therapy.