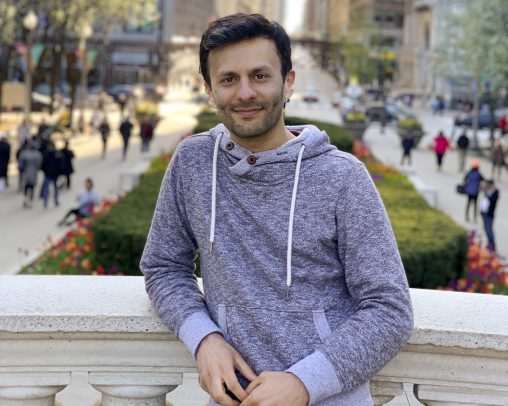 Rahim Akrami, who graduated with master’s degrees in public administration and international and comparative politics in 2019, is serving a fellowship with the city of Dubuque, Iowa.

The childhood of 2019 Wright State University grad Rahim Akrami was anything but normal growing up in war-torn Kandahar, Afghanistan. The fighting brought with it destruction, chaos and a bleak future.

“But my parents never let war interrupt our education,” said Akrami. “They made sure we received a quality education. And when schools would close due to insecurity, we were promptly home-schooled.”

That paid off for Akrami, who today has two master’s degrees from Wright State and won a highly competitive fellowship that has him working for the city of Dubuque, Iowa.

During his final semester at Wright State earlier this year, Akrami was selected to receive the Local Government Management Fellowship from the International City Management Association in a competition among hundreds of public administration graduate students. The goal of the fellowship is to train young professionals in local governments in leadership, management and ethical public service.

Akrami was offered a two-year position as a Fellow in Dubuque, a city of 58,000 located on the Mississippi River at the junction of Iowa, Illinois and Wisconsin. It serves as the main commercial, industrial, education and cultural center for the area.

Akrami says he is extremely grateful for the fellowship.

“And it’s an absolute joy to see my family’s happiness,” he said. “My parents have sacrificed so much to see me and my siblings succeed in life, and this is an excellent first real step towards that success.”

Akrami first came to the United States in 2005 at age 16 on a one-year high school exchange scholarship in Humble, Texas. The cultural exchange program gave honor students the opportunity to study in an American high school, experience American life and share culture.

“Having never left home before and being thousands of miles away from home was a challenging but a self-growth experience,” said Akrami. “My year in the U.S. was an amazing experience, and I was eager to come back for more schooling.”

Akrami returned to Afghanistan in 2006 to finish high school. After graduating in 2008, he began working at a newspaper in Kandahar as a translator and editor.

That experience sparked his interest in international politics. He would also regularly discuss politics with his parents, who were well-versed in it.

“However, after working in the media, I felt it wasn’t a proper representation of politics, and I was curious to learn more through a formal and objective medium by going to college,” he said. “My interest ran beyond a mere inquisitive level however, as I saw myself pursuing a career in politics in the long-run.”

Akrami received a full-tuition scholarship to Berea College in Kentucky and graduated in the summer of 2014 with a bachelor’s degree in political science. The following fall he was accepted at Wright State.

He calls his experience at Wright State “exceptional.”

“Both the international and comparative politics and M.P.A. programs are very well run and staffed by some amazing faculty,” he said. “I have worked with and had very supportive, encouraging and helpful professors and mentors throughout my four years at Wright State.”

Laura Luehrmann, professor of political science and director of the Master of Arts Program in International and Comparative Politics, said Akrami is one of those students you love having in a seminar.

“He is smart, inquisitive and hard-working,” she said. “Like so many of our international students, he enriches the classroom experience for everyone by connecting theory with lived experiences.”

During his college years, Akrami took a serious interest in playing organized soccer.

“I’ve learned it is an excellent hobby to de-stress,” he said. “While anyone can learn to play it, it is an intense sport too. I have had a multitude of injuries throughout the last 10 years, including a serious concussion. But somehow I’m still and I feel like will always be attracted to it.”

On May 4, Akrami graduated with honors with master’s degrees in public administration and international and comparative politics. And then it was off to Dubuque to begin the fellowship.

Akrami says he is passionate about public service and learning more about how local governments work. He hopes the fellowship will enable him to grow professionally, get some experience and move closer to his long-term goal of becoming a city manager.

“As the largest government branch in the U.S., local governments are sometimes taken for granted,” he said, “but they practically run most of our daily lives.”