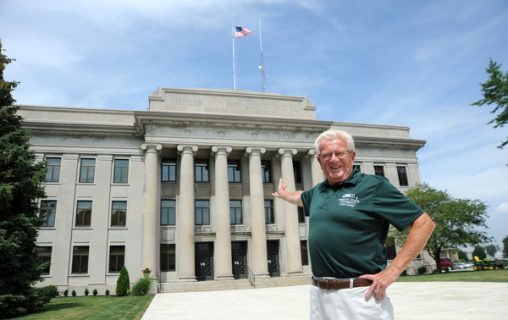 Kip Wright of Celina has long served as an unpaid tour guide, showing off the Mercer County Courthouse to visitors from across the nation and Canada. He is looking to recruit a new generation of guides to fill in for him occasionally and to prepare for the courthouse’s 100th anniversary in 2023.

During a lengthy and robust law enforcement career that started in 1971 and continues to this day, Kip Wright said one role in particular has given him considerable satisfaction – courthouse tour guide.

Wright, 69, said nothing beats the experience of having adults walk up to him to ask if he remembers taking them as a child on a tour of the Mercer County Courthouse 30 years ago. He then knows he’s made a lifelong impact.

“It’s such a remarkable building,” Wright, a dedicated advocate of local government, said of the courthouse. “I just want to share that exuberance with kids.”

Wright, who is semiretired, still working as an instructor for the Wright State University-Lake Campus Police Academy, which he helped found as its first commander, isn’t stepping down as courthouse tour guide. However, he is looking to recruit a new generation of guides to fill in for him from time to time and to prepare for the courthouse’s 100th anniversary in 2023, when the tour circuit will ramp up considerably.

“I want to continue as much as I can, maybe in a little bit lesser capacity, but I think this is an opportunity for us to start training some people to help with the 100th anniversary,” Wright said. “If we open this courthouse up to tours, we can be running three and four tours at the same time.”

In 1977, when Wright left his position as lieutenant with the sheriff’s office to become an adult probation officer/court investigator under Common Pleas Court Judge Dean James, he started to pay attention to the building’s finer details.

James began pointing out to Wright the impressive Greek-styled architecture, the ancient fossils embedded within the million-year-old black marble on the third floor and much, much more.

“He said, ‘You’ve heard the term take the time to smell the roses?’ ” Wright recalled. “He said, ‘Why don’t you take some time and look the building over a lot and then do some research on it?’ ”

Wright took the judge’s suggestion and began learning all he could about the building described by The Daily Standard in September 1923 as a “veritable marble palace.”

About two decades after taking the job, Wright was named co-chairperson of a steering committee that for about two years laid the groundwork for the 75th courthouse anniversary celebration in 1998. That celebration was an almost entire summer of events, including open houses and public tours of the courthouse, that culminated with a rededication ceremony on Sept. 6, 1998, he said.

“I don’t know if I ever became official. I just started doing it,” Wright said of his role as volunteer courthouse guide, which began to grow as he took groups of students through the building.

Over the years he’s ushered through the courthouse Fort Recovery third-graders, Red Hat Ladies, Celina-Mercer County Chamber of Commerce Adult Leadership groups and many other organizations and individuals.

He said he conducts about 20 tours a year that acquaint as many as 400 people with the courthouse.

“So we have people come here from all states that come and want to see it. Some of them have check-off lists (of courthouses),” Wright said, noting the county courthouse is on the state and national registry of historical buildings.

Wright likes to keep groups at no more than 25 people and said he’s given tours for as few as two people. His tours can last anywhere from an hour to three hours, depending on what the group wants.

Forty-foot-tall Corinthian columns grace the four entrances of the gray Bedford limestone building in the heart of downtown Celina. Its open interior is enhanced with large bronze doors (now faded from oxidation) and marble floors, walls and staircases. Visitors can climb the ornate, winding staircase to view the rotunda below or look upward to see the stained-glass dome.

Asked what impresses him most about the courthouse, which was financed with a $500,000 voter-approved bond issue, Wright pointed to the “opulence of marble.”

The interior walls and floors consist of the finest marble that had been pulled up in huge blocks from Vermont quarries and sliced into slabs.

“These are about three-quarters of an inch thick,” he said of the marble slabs that are polished on the outside and rough on the back side.

Each slab was numbered so workers could install them in sequence.

“Right here where we’re standing, there’s a two-basement system that supports all of this weight. A lot of it’s used for storage and such,” he pointed out from the first floor. “This floor is concrete and then laid with this marble like we would lay tile today.”

Black marble accentuates the main entrances and the grand staircase rail. Wright said a couple of hundred fossils can be seen in the black marble, among them a seashell and a baby shark tooth.

Wright said an alcove between the second and third floors best exemplifies the architectural historical value of the courthouse.

“See that vein in that marble? It goes all the way up,” he said. “Each of those panels had to come in a natural sequence.”

The craftsmanship on display throughout the building is extraordinary, Wright said, as he focused his attention on the balusters of the marble handrail that runs along the stairways.

“Someone had to take a block of marble and turn that on a lathe to make all these,” he marveled aloud. “This was done by hand.”

Another prominent feature of the courthouse is the stained-glass dome.

Unbeknownst to many, the courthouse’s glass dome is not directly exposed to the elements. Rather, an octagonal structure with a flat roof consisting of a frame of blocks or panels containing half-inch thick glass surrounds it.

“That’s leaded glass. It looks transparent but for insurance purposes many years ago the commissioners were required to put a … plastic bubble over that,” Wright said.

That protects the precious glass from stress fractures and meteorites, he explained.

“Meteorites, when they hit the earth’s atmosphere, thousands of them fall every day – anything from a speck of sand to a rock as big as your hand,” Wright said.

Wright said anyone interested in becoming an unpaid courthouse guide should call the county commissioners office at 419-586-3178.