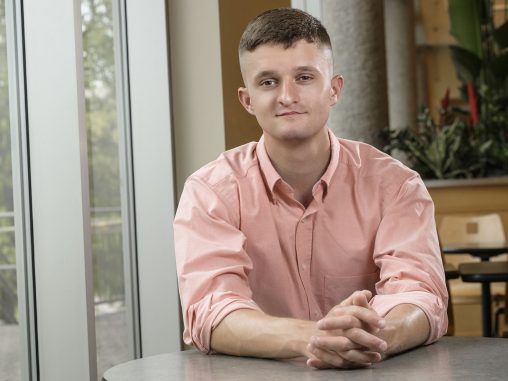 Scott Nicholson is working toward a business management degree at Wright State while also serving in the National Guard and Army ROTC.

Scott Nicholson is one of the few students at Wright State University who embark on a unique academic and professional journey through the Army National Guard. This experience allows Nicholson to pursue a bachelor’s degree in business management while serving his country.

The National Guard is a reserve military force formed from members of all 50 states as well as the District of Columbia, Guam, the Virgin Islands and Puerto Rico, with a goal of protecting the community and the nation at the state and federal level. Most Guard members serve part-time while working in a civilian job or attending school full time. The National Guard is selective, with applicants having to pass physical, educational and moral requirements in order to join.

Growing up, Nicholson had numerous family members who served in the armed forces, including a great uncle who was a World War II veteran. These family members have served as role models for him since he was young.

“I really looked up to them,” he said. “They were huge mentors to me, and even as a kid I was intrigued by what they did.”

Nicholson, a Fairborn High School graduate, thought about enlisting in the U.S. Coast Guard but decided to go the college route and see what doors the National Guard could open for him. He chose Wright State because it allowed him to get an affordable education while also being able to join ROTC and pursue his goal of becoming an officer.

Although he started out in Air Force ROTC at Wright State, he switched to Army ROTC before the start of his sophomore year.

“I felt (Army ROTC) was more in line with what I wanted to do,” he said. “When I went in and talked with them, they were very welcoming and very honest about the opportunities Army can offer, but also about the difficulties most cadets experience while in Army ROTC. I ended up making the switch and a semester later I contracted.”

Nicholson decided to join the simultaneous membership program, which allows him to serve in the National Guard while also participating in Wright State’s Army ROTC program. After he graduates this fall, Nicholson will be commissioned as a second lieutenant in the U.S. Army and can continue to serve in the National Guard or become an active duty member.

Being in the simultaneous membership program can come with numerous challenges. The year-round commitments that come with the National Guard and ROTC can provide a challenge when combined with a full-time class schedule and the responsibilities of everyday life. Even in the summer, when most students enjoy a nearly four-month break from classes, Army ROTC cadets can have numerous commitments, including attending summer training in Fort Knox, Kentucky.

Nicholson credits the National Guard with helping him succeed in the classroom during hectic times.

“The Guard is willing to work with you,” he said. “If there’s a National Guard event that conflicts with ROTC or schoolwork, it is possible to be excused from it. … They are very serious about school coming first.”

Nicholson offered this advice to anyone considering joining the National Guard or ROTC: “You really are forced to manage your time better, and that is essential in the military. I think it is important to do your research before joining, so you know about the opportunities and possibilities it can offer you.”