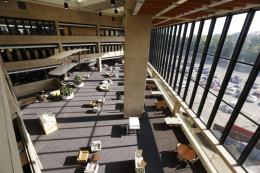 Wright State University students returning to campus this year will see the library transformed with new carpeting and furniture, changes based on a student survey conducted four years ago.

The project to replace the old furnishings, which officials said hadn’t been updated in 20 to 30 years, is being paid for through $1.1 million of about $13.5 million the university received in state funding. The first day of classes for the fall semester is Aug. 26.

Wright State has been hit by financial and legal troubles for the last three years, and enrollment dropped last school year.

WSU librarian Sue Polanka said the investment in the library is a welcome change that will have a positive impact for years to come.

Polanka said the library is visited by about 600,000 people a year, and the remodeling has transformed the setting.

“If you walk around campus now, you’ll see all of our old furniture in the open study areas in the different halls and rooms,” Polanka said.

The carpeting was replaced on three floors, and the stairwells were remodeled. More soft seating options are available. There are now bicycle desks and standing desks. There are innovative chairs that allow users to move as research shows benefits of moving while studying, Polanka said.

Polanka said the new furniture came in May, and it was quite the job to coordinate removing the old and installing the new.

What students said they wanted most was privacy while studying, and the library now has added cubicles and nine private rooms for a total of 13, seven for individuals and six designed for multiple purposes. Students, staff and faculty can reserve the private rooms for two hours at a time.

The private rooms opened in February and library staff noted unprecedented use by students leading up to finals.

WSU senior Krishel Stout, a nursing major, works at the library and helped distribute the questionnaires to students in 2015. The survey asked a variety of questions, and the slips of paper were collected and stored in a box. Stout said she forgot all about the surveys until last year when funding for the furnishings became available.

“Everyone likes something different. We are trying to incorporate a variety of study preferences in one building. There’s something for everyone,” Stout said.

Stout said the old furnishings were all the same and not inviting. She said she’s already getting positive comments from students.

“I had a student come up to me and say how much she loved the carpeting,” Stout said.

View the entire story at springfieldnewssun.com