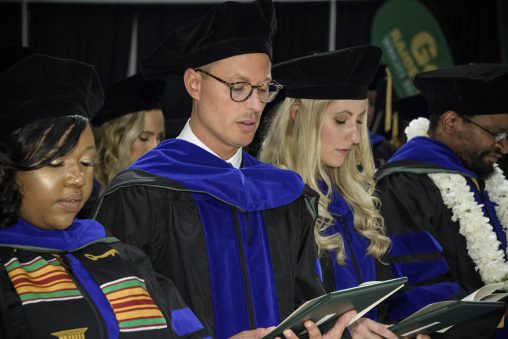 Graduates of the School of Professional Psychology took the Oath of Affirmation at the end of commencement on July 19. (Photos by Chris Snyder)

The Wright State University School of Professional Psychology (SOPP) celebrated the graduation of 23 students at its 38th annual commencement ceremony July 19 in the Student Union Apollo Room. The ceremony celebrated the fortieth anniversary of SOPP admitting its first class of students in 1979.

“Our program prepares students to be diversity competent clinical psychologists,” said LaPearl Logan Winfrey, dean of the School of Professional Psychology and master of ceremonies. “Attention to cultural and individual diversity is a core part of our curriculum and well represented in the backgrounds of the members of this class.”

She told the class that they would always have a special place in her heart because they were the first class admitted under her tenure as dean.

“An African proverb says: Those who accomplish great things, pay attention to little ones,” said Winfrey. “As you become health service psychologists, I wish you many accomplishments, great and small.”

The Wright State University School of Professional Psychology honored its graduates during a commencement ceremony July 19.

Wright State Provost Susan Edwards welcomed graduates, families and friends, and offered points of pride about the class. With the graduation of the class of 2019, SOPP now boasts 882 alumni in nearly every state and multiple countries across the globe.

Through practicums and internships, graduates completed 72,000 hours of psychological services at more than 50 training sites throughout the southern half of Ohio. More than half are published authors or have presented at professional conferences.

Eleven of the graduates hail from Ohio and four earned their undergraduate degrees from Wright State. Ethnic minorities and Appalachian students comprise 39 percent of the graduating class, reflecting the school’s commitment to educating students from diverse backgrounds.

SOPP continues its tradition of educating students to serve military populations. Two graduates are military veterans and six completed internships at Veterans Affairs Medical Centers, while one completed an internship at the Naval Medical Center. Three graduates will begin their professional careers at VA facilities and one graduate has been commissioned in the U.S. Navy.

Others in the Class of 2019 plan to work in medical centers, correctional facilities, psychiatric facilities and school systems, while some plan to pursue academic teaching or independent practice. 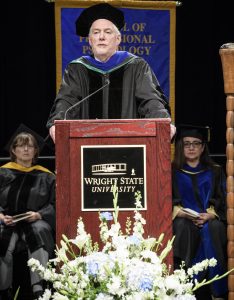 Joseph Rock, a 1982 graduate, gave the keynote address during the School of Professional Psychology’s commencement.

In his keynote address, Joseph Rock, staff psychologist at the Cleveland Clinic and a 1982 graduate, described the founding of SOPP and the Duke E. Ellis Human Development Institute. He shared personal experiences about the founders and what it was like to be a student in the 1979 charter class.

“When my classmates and I walked into the School of Professional Psychology in 1979, we did not walk into just any school,” said Rock. “We walked into a school founded on the ideals of quality, diversity and excellence that remains to this day.”

Rock remarked that recent developments in healthcare make it an exciting time to be a psychologist. He said he envied the graduates who are walking into a healthcare environment that he thinks truly values their abilities and contributions, which was not always the case.

“My education at the School of Professional Psychology prepared me to enter a profession that has brought me tremendous personal and professional satisfaction, and helped give meaning and direction to my life,” Rock added. “I realize how grateful I am to the school for having given me that opportunity, as I’m sure you graduates will in the years to come.”

During the ceremony, the following student awards were presented:

Rather than presenting individual faculty awards, the class decided to thank the entire faculty for their role in the students’ success.

“Without the sacrifices, the support, the caring, we would not be here right now,” said Alicia J. Wagoner, representing the graduates. “You made us capable of who we are today. You built our character and helped us realize the path towards our dream and the ultimate success.”

The graduates also wrote sentiments about what each faculty member meant to them, which were on display at the reception. 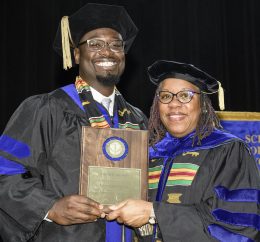 Earnest L. Brown Jr. was selected by fellow classmates to give remarks at the ceremony. He described the class as a dynamic collection of talent, personalities, lived experiences and strengths and talked about how they had grown.

“Bonds were formed, friendships were developed and lifelong experiences and connections were made,” said Brown. “We recognized and realized that in order to get to today, we needed each other academically, personally and professionally.”

Winfrey led the new doctors in taking the Oath of Affirmation, adapted from the Code of Ethics of the American Psychological Association by founding dean, Ronald Fox.

Winfrey offered final words of advice to the graduates: “You will advocate for the underserved and be an instrument of a just society. Never minimize your power for good. Never shrink your responsibility nor underestimate your impact on the people you serve.”

Wright State’s SOPP was among the first doctoral programs in the country to develop a practitioner model program and grant the Doctor of Psychology (Psy.D.) degree. It has been continuously accredited by the American Psychological Association since graduating the charter class in 1982.