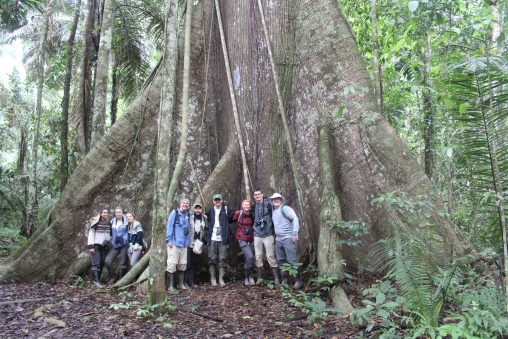 (Left to right) Students Yasmeen Samar, Lilly Holmes, Casey Sharp, biology professor Tom Rooney, guide Javo Farfán, students Justin Barbour, Elyse Angle, Kyle Briggs and Riley Shaffer. They are seen standing at the base of a kapok tree, which can grow to a height of 200 feet.

“Going up that river was like traveling back to the earliest beginnings of the world, when vegetation rioted on the earth and the big trees were kings.”—Joseph Conrad, Heart of Darkness

The Amazon rain forest opened its arms to a group of Wright State University students on a dazzling study abroad trip that included descending the Peruvian Andes, trekking through a cloud forest and riding a jungle river.

“This is not your typical, ‘Let’s go see the rain forest,’ said Thomas Rooney, the professor of biological sciences who supervised the seven biology and environmental sciences students during the two-week trip in May. “This is, ‘Let’s go to the edge of civilization and then go beyond.’ In a sense we’re really time-traveling to a different time era.”

It was Rooney’s fifth study abroad trip to the Amazon. He hopes to do it again next year and make it open to students of all majors.

The group met in Cusco, Peru, a city 11,300 feet high in the Andes Mountains that was once capital of the Inca Empire and is now known for its archaeological remains. The students spent their first day visiting archaeological sites in the Sacred Valley of the Incas, which includes the ancient city of Machu Picchu.

The next day the group descended the Andes in a van and arrived at Manu National Park, a remote reserve of more than 4 million acres that includes Andean highlands, cloud forest and lowland jungle.

The park is known for its rich biodiversity, notably hundreds of bird species. Boats ply the Manu River past dense Amazonian jungle that is home to jaguars, black caimans and spider monkeys. The difficulty in getting to the park limits visitors to only a few thousand a year.

After exiting their van, the students descended another 3,000 feet on foot through alpine grasslands and entered a forest cloaked in clouds.

“It’s where the clouds touch the sides of the mountain,” said Lilly Holmes, an environmental sciences major from West Jefferson. “I just loved all of the vegetation there. I have a soft spot for mosses and ferns.That’s where a lot of those thrive. It felt so whimsical walking through there. It felt like I was in ‘Lord of the Rings.’”

Rooney said going to the rain forest is physically challenging. The high altitude makes it difficult to breath and the equatorial sun can be fiercely hot. Temperatures soar into the 90s.

“And once we get to the lowlands, it’s hot and humid but you’re wearing long sleeves and pants to protect against biting insects. And you get rained on,” said Rooney. “So it takes a certain amount of toughness to do this. But in a sense it enhances the experience of seeing monkeys in the wild.” 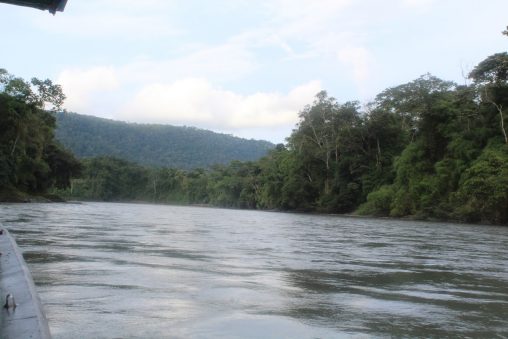 Among their many methods of travel during the trip, the group motored up the Amazonian waterways through the jungle.

The group, led by two professional guides, traveled to the river town of Atalaya, where they boarded a boat on what translates as the Upper Mother of God River, a fast-moving waterway fed by streams sluicing down the mountains.

They stopped at a hot springs, where they met a 70s-something shaman who told them stories about himself and his isolated tribe being rounded up by the military and forced to live in a town in order to become civilized.

“He carried with him a lot of stories of a culture that has basically been obliterated,” said Rooney.

Then the group motored up the Manu River to a lodge operated by the Machiguengas, an indigenous hunting-gathering tribe. Further upriver is another tribe that stays out of contact with society.

“The Machiguenga absolutely fear them,” said Rooney. “The tribe will go for years without being seen.”

A sign posted in Atalaya warns: “Caution. This is a transitional zone for indigenous (people) in self-isolation. To avoid conflicts, (make) no contact. Don’t trade clothes or other items. No photographs.”

At one point, Holmes faced off with a spider the size of a hockey puck in her cabin. A Machiguenga man came in and plucked the spider off of her bug net with his bare hands and threw it outside.

“That was probably the scariest thing,” Holmes said. “It was just a stressful moment.”

The students did a lot of hiking, learned how to start a fire in the middle of a damp rain forest and set up cameras on the trails at night that were triggered by motion sensors. They captured the images of a wild peccary, a pig-like hoofed mammal, and a trumpeter, a chicken-sized bird named for the trumpeting or cackling threat call of the males.

They also spent time on some lakes and at the mineral-rich clay lick that attracts wildlife.

The students saw 16 species of parrotlets, parakeets, parrots, and macaws. Just 6 species of macaws. Other highlights included sightings of howler, capuchin, squirrel and dusky titi monkeys, King vultures and a black caiman, which is a large crocodile.

Students were surprised that the capuchin monkeys they came upon didn’t really run away from them.

“The monkeys are curious because they are in a place where they are protected and not hunted,” said Rooney. “They are curious so you get to see a lot more natural behavior.”

The students spent a night at a wildlife center that featured a tree with a canopy tower 150 feet off the ground. The group observed birds and wildlife from the canopy platform and used ropes to practice canopy rappelling, which scientists sometimes do when there is no tower. 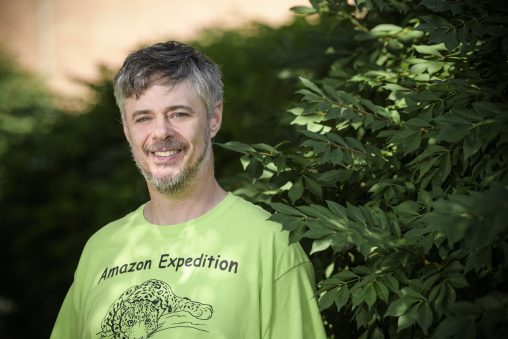 Thomas Rooney, professor of biological sciences, has taken Wright State students to the Amazon five times and hopes to do it again next year.

Rooney said his favorite part of the trip was just watching the students react and soak it all in.

“They go with certain expectations of what they will see in the rain forest,” he said, “but that doesn’t really prepare them for what they see and what they experience.”

Some of the students on the trips have aspired to become tropical biologists.

Other students have gone on to get their medical degrees and doctorates in neuroscience.

“I think the course ends up giving them a lot of confidence and really helps expand their horizons in terms of what’s possible,” said Rooney.

He said the trip is probably the best study-abroad opportunity at Wright State and in all of Ohio.

Holmes said the trip gave her a better appreciation for other cultures and opened her eyes to the importance of the rain forest.

“What was really life-changing was to see that it was almost like the heart of the planet, the lungs, the part that makes our planet so fascinating,” she said.