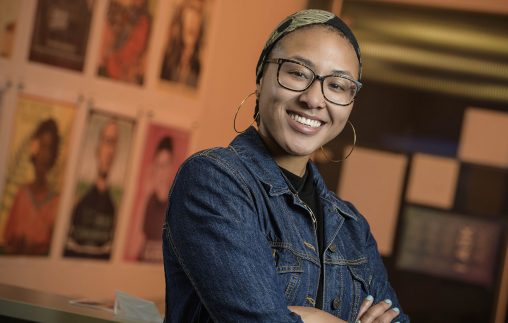 It can injure you, put you in fear of your life, cost you money or your job, restrict your freedom and give rise to endless sleepless nights.

The “it” is power-based violence, an abusive relationship with a partner, former partner, colleague, acquaintance or complete stranger.

“Power-based violence is really widespread,” said Tylar O’Neal-White, coordinator of Wright State University’s Power Based Violence Program. “Anybody can be a victim or a perpetrator of it.”

To help prevent power-based violence on campus, Wright State recently formed the Coordinated Community Response Team thanks to a grant from the Justice Department’s Office of Violence Against Women.

“We are taking the steps to make sure students know that if this happens to you there is a place for you to come,” said O’Neal-White. “There is someone for you to talk to and something can be done to make you feel safe again and to give you that power back.”

O’Neal-White grew up in the Dayton area, graduating from Wayne High School in 2011. Attracted to Wright State by its affordability, she graduated in 2015 with a bachelor’s degree in rehabilitation services and is now working on her master’s degree in social work.

In addition to serving as coordinator of the Power Base Violence Program in the Student Advocacy and Wellness Center, O’Neal-White interns in the Survivor Advocacy and Case Management Program. The program is led by a licensed social worker who is on call around the clock.

Examples include domestic violence, stalking and harassment. Victims can be beaten, emotionally abused, restricted in how they spend their money, be barred from getting jobs and just generally kept dependent by their abuser.

“That’s really why my job is important – to help educate about all the complexities of it,” said O’Neal-White.

Victims can report abuse at the Survivor Advocacy and Case Management Program in the Student Union and it will remain confidential. Victims can be referred to attorneys and counselors and helped with academic issues and emergency housing.

“Anything you can think a survivor might need to make their experience at Wright State feel safer while they experience power-based violence, we are there to fill all of those gaps,” said O’Neal-White, who helps coordinate policy, programming and awareness events.

O’Neal-White is also working on creating a cohort of Wright State students to connect with abused students and get them help by educating them about the available resources.

“Students are going to hear about the abuse of fellow students way before we do,” she said. “And they are more likely to listen to their peers and their peers’ advice than a professor or staffer.”