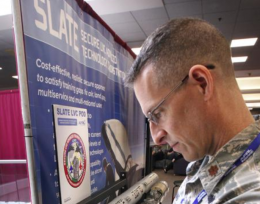 WSARC has been selected to lead a “bold, first-of-its-kind” U.S. Air Force Academic Partnership and Engagement Experiment — dubbed “APEX” — program to boost Air Force partnerships with academia, the institution said in a release.

“A big part of it is collaboration and education and connecting people together who don’t normally get connected,” Dennis Andersh, president and chief executive of WSARC, said in an interview.

WSARC will be the lead agency assisting the Air Force in that process, Andersh said.

The work “will be countrywide,” he said. “We’ll start in smaller regions to begin with. But eventually it will be across the country.”

The idea is to accelerate technology transfer from universities to industry and the Air Force.

The corporation and other partners around the country will receive the money. The money will seed teams to work together on various projects.

The work won’t be entirely new, Andersh said. “We’re building off what we’ve been doing in Ohio for the past five years.”

The Ohio Federal Research Network has been funded by state government in that time. The focus of that effort was very similar — to better connect Ohio academic institutions, public and private, to industry and federal centers across Ohio, including AFRL, NASA and others.

The goal was the same: Find technology solutions quickly, bring new ideas to federal offices and produce the “workforce for the future.”