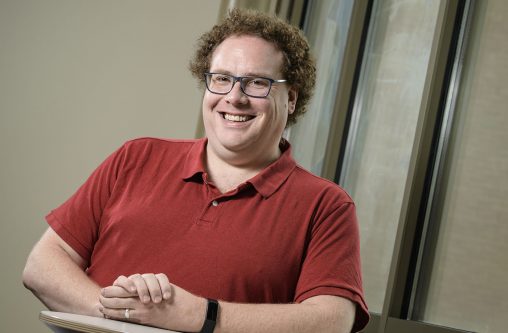 The past few months have been a whirlwind for Darrell Frye. After getting laid off from his job of 21 years, he was forced to make a major life decision in a matter of weeks — to go back to college at Wright State and pursue a second degree at age 45.

Frye received a bachelor’s degree in economics in 1998 from Vanderbilt University, where he established an internship that would lead him into the next 21 years of his life. The internship was with a textbook publishing company, which would later hire Frye as a full-time content project manager. His duties as project manager included coordinating the activities and schedules of authors, editors and printers to make sure everything came together accordingly.

While the job provided Frye steady employment for over two decades, he knew things may be coming to an end based on the layoff tendencies and financial struggles of the company. When Frye learned he had been laid off, he was far from astonished.

“I was surprised in the initial moment, but I had also been waiting for it to happen for close to 10 years,” he said. “They hadn’t turned a profit in a long time and every year they had another round of layoffs, so I felt it was just my turn at that point.”

Now without a job, Frye had to decide where he wanted to go next in his life. He said he initially looked for other jobs using his degree and job experience but found it was challenging to do so in today’s job market.

“It’s hard when you have 21 years of experience in a specific field to try and make a lateral movement,” he said.

He then made the decision to return to college to pursue a degree in accounting and found that Wright State had what he was looking for in terms of proximity to home and a quality business education.

“Since I live in Miamisburg, Wright State was pretty convenient considering it’s only 20 minutes away,” Frye said. “It’s a good campus with a good business school, and while it’s been an adjustment being older than most people, I feel I’ve moved into fully being a student and have adjusted well. It’s crazy though — my degree is older than a lot of students that go here.”

While Frye may have adjusted to becoming a student again, he faces challenges that some college students don’t have to worry about. Having a house and a husband, Frye has to manage part-time work on top of classes. He does this by going to class during the day and working nights and weekends, something that can get very hectic.

“It can be tough, but in the end you just have to stay focused and make your own free time whenever you can,” he said.

If all goes well, Frye will graduate from Wright State in December 2020 with a bachelor’s degree in accountancy and a new path to a new career. He hopes that his accounting degree will open up numerous job opportunities in the future.

“I’ve always liked accounting, and it’s probably what I should have majored in the first time around,” he said. “I’m not 100% sure what I want to do as a career yet, but I wouldn’t mind working for an accounting firm or corporate accounting department in the future.”