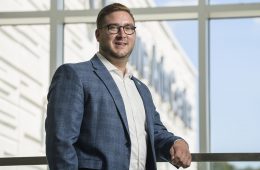 Nick Warrington, a 2012 graduate, will oversee the ARTSGala event as the new director of events and community for the Wright State College of Liberal Arts. Previous to this role, he was assistant director of alumni relations the past five years.

One of Warrington’s goals for the event is to attract more first-time attendees, including more young people. He said he’s excited to work with his colleagues in the College of Liberal Arts and the ARTSGala host committee to find ways to enhance the event’s experience.

“Anyone who is passionate about the arts should consider attending ARTSGala and supporting the College of Liberal Arts,” Warrington said. “Our students are the future of the fine and performing arts both here in the Dayton region and across the country. From New York to Hollywood, our music, theatre, dance, motion pictures and art students are leaving their mark in the industry.”

Warrington’s responsibilities are not limited to just ARTSGala. He also oversees the college’s student-alumni mentoring program, connecting students with professionals in their field; provides support to the Dean’s leadership board, which offers input on higher education issues; and organizes the annual College of Liberal Arts scholarship donor reception. The reception is Oct. 10 this year.

He will also work with the college’s new director of major gifts to provide continued support for liberal arts students, along with providing support to the college’s social media accounts.

“We are delighted to have Nick join us in COLA,” said Linda Caron, dean of the College of Liberal Arts. “He is an experienced event planner and volunteer coordinator and a passionate advocate for Wright State. I love his enthusiasm and energy and couldn’t be happier that Nick has joined team COLA.”

Warrington received a bachelor’s degree in middle childhood education from Wright State in 2012. While at the university, he was involved in numerous leadership roles on campus, including vice president of the Student Government Association his senior year. He also earned a master’s degree in educational leadership and policy studies from Virginia Tech.

Wright State University is one of the region’s largest higher education institutions with a total enrollment of 13,742. The university also staffs more than 2,000 employees.