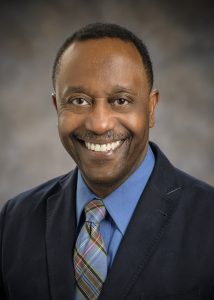 Gary LeRoy is associate dean for student affairs and admissions at the Boonshoft School of Medicine.

Gary LeRoy, M.D., ’88, associate dean for student affairs and admissions at the Wright State University Boonshoft School of Medicine, has become the new president of the American Academy of Family Physicians (AAFP). LeRoy was sworn in on September 25 and will serve a one-year term. He will serve as president during the organization’s 50th year.

The AAFP was founded in 1969 and represents 131,400 physicians and medical students nationwide. The organization is devoted to primary care and advocates on behalf of family physicians and patients across the country.

LeRoy learned about the AAFP when he was a medical student at Wright State. He was impressed with its academic journal, American Family Physician. He found that it was educational, easy to read and simply illustrated the specialty of family medicine.

He has been a member of the AAFP since 1991, serving in leadership roles at both the state and national levels. Since 2010, LeRoy has served as an Ohio delegate to the AAFP Conference of Delegates. He served as chair of the Commission on Education and has also chaired the Commission on Membership and Member Services. He joined the AAFP board in 2015.

LeRoy got involved with the organization because he wanted to serve the specialty of family medicine and make a positive difference in the lives of others. He never sought status or recognition.

“I hope to be a role model for emerging young leaders,” LeRoy said. “I hope to bring the specialty of family medicine into the forefront of the thoughts of all Americans who are seeking a permanent solution to poor health outcomes and gaping health care disparities among segments of the U.S. population.”

LeRoy also wishes to give a voice to primary care physicians who may feel marginalized or burnt out in the current health care system. This is due in part to the burdens of administrative complexity that physicians face. Many also feel that they have little influence with lawmakers and other decision-makers in health care.

“I am proud that my election will also bring added notoriety to Dayton and the Boonshoft School of Medicine. Our medical students and faculty have a consistent history of being selected for leadership roles. This does not happen by coincidence,” LeRoy said. “I hope my role as president of the AAFP will inspire others to stand up and be counted as present when they hear the call for servant leadership. I hope to leave a legacy of hope for those who wish to practice the true art of medicine.”

LeRoy also has been active in the Ohio Academy of Family Physicians (OAFP) and has volunteered for service on various committees and commissions. He served as president of the OAFP from 2004 to 2005 and serves as a board member. In 2014, he was recognized with the OAFP Family Medicine Educator of the Year award.

He is a lifelong Daytonian and public servant. He serves the underprivileged as a staff physician at the East Dayton Health Clinic. He served the clinic as medical director from 1994 to 2008 and helped secure funding to remodel and expand the center and its services.