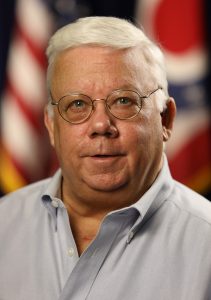 Robert Carlson, director of the Center for Interventions, Treatment and Addictions Research.

Robert Carlson, Ph.D., professor in the Department of Population and Public Health Sciences and director of the Center for Interventions, Treatment and Addictions Research at the Wright State University Boonshoft School of Medicine, has been appointed to the Ohio attorney general’s Scientific Committee on Opioid Prevention and Education (SCOPE) Committee. The task force will meet regularly to discuss issues related to Ohio’s ongoing struggles with opioid addiction among its citizens.

Although Ohio has seen a recent decrease in heroin and prescription opioid overdoses, the state retains the second-highest number of opioid-related deaths in the country, according to the Centers for Disease Control and Prevention. There are many strategies being used around the state to combat the epidemic. These include screening and treatment access; abuse deterrent formulations; safe medication disposal programs; recommendations and education to providers on appropriate prescribing and monitoring; Medicaid expansion for access to treatment; prescription drug monitoring programs; and naloxone distribution.

The primary focus of the state’s efforts is treatment rather than prevention. Preventive measures, by contrast, could narrow the number of new people with opioid use disorder. Ohio Attorney General Dave Yost’s SCOPE Committee will look for the circumstantial, environmental, social, behavioral and psychological factors that incline some people to substance use disorder.

“I was thrilled to be invited to serve on the attorney general’s committee,” Carlson said. “I have been involved with research on non-medical prescription opioid use since 2008 and am currently involved in research concerning illicit fentanyl use and the use of diverted buprenorphine among people with opioid use disorder. With this experience, I hope to work with the team to develop new, innovative public health interventions that hopefully make a difference in what has become the worst substance abuse epidemic in the nation. The loss of so many lives, over 70,000 overdose deaths across the country in 2017, and its far reach are having a devastating impact. It is unlike anything I have seen in the past 30 years of substance abuse research.”